Game of Thrones' Lena Headey Slams Troll Who Tells Her She Needs to Wear Makeup: 'Go F— Yourself' 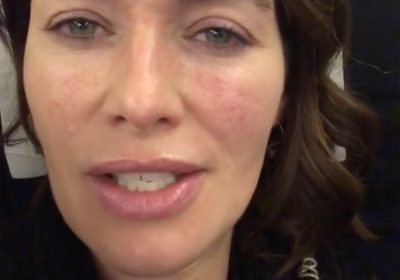 Lena Headey isn’t going to let an online troll tell her how to live her life!

On Monday, the Game of Thrones star, 45, shared a video of herself rocking a makeup-free look, prompting a number of her followers to praise her “natural beauty.”

However, one follower, in particular, didn’t have anything nice to say.

“Don’t record yourself without makeup again please,” the social media user wrote in the comment section of Headey’s video.

Headey, who plays the tough Cersei Lannister, in the beloved HBO series, fired back instantly.

“I shall continue to not wear make up. Go f— yourself,” Headey wrote.

Her response was applauded by a number of fans as they wrote, “Thank you for not feeling required to wear make up every waking moment! Remember you have done amazing things with that face.”

“Does he know that he is speaking to queen Cersei? Has he lost his sense of fear?” another fan wrote.

WARNING EXPLICIT LANGUAGE IN VIDEO BELOW

In the clip, Headey can be heard raving over her upcoming film Fighting with My Family, which stars Dwayne “The Rock” Johnson.

Fighting with My Family follows a former wrestler and his family as they make a living off performing at small venues around the country.

While Headey anticipates the release of a new project, she is saying goodbye to another.

On April 14, the final season of Game of Thrones will air on HBO.

Last month, the network released an atmospheric teaser depicting Jon Snow (Kit Harington) grappling with his true parentage as he passes a statue of Lyanna Stark, his birth mother, in the Winterfell catacombs.

Sansa (Sophie Turner) and Arya Stark (Maisie Williams) join the man they thought was their half-brother (surprise, they’re cousins!), and icy air courses through the tunnel as it seems the White Walkers arrive.

Headey recently opened up to The Daily Beast, describing what it’s been like to say goodbye to her character after almost a decade and how she wants to prove she’s capable of other roles.

“With Cersei, it’s been eight years, so that character is big in people’s minds, and now it’s over. That tiny TV show. People sort of forget the work previous, which is a very different thing,” Headey told The Daily Beast.

“I appreciate all that success, and if it brings with it the fact that people think that’s it, I’m very happy to show them differently.”