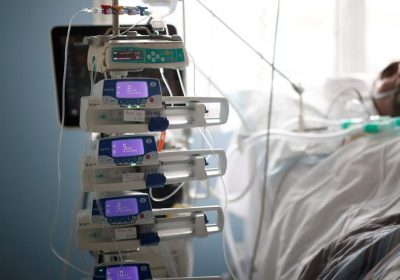 PARIS (Reuters) – France’s COVID-19 figures are going up at a “vertiginous rate” and if the situation does not improve, further lockdown measures may be needed, Frederic Valletoux, president of the French hospital federation, said on Tuesday.

“The epidemic is gathering pace, and the figures are exploding,” Valletoux, who is also mayor of Fontainebleau just south of Paris, told LCI TV.

Official data published on Monday showed that the tally of new COVID-19 cases in France had accelerated further despite the start of a third lockdown over the weekend, with the number of people in intensive care at a new four-month high.

Valletoux said if the situation did not improve, the French hospital system could face an “unprecedented violent shock” in about three weeks time.

France reported 15,792 new coronavirus cases on Monday, more than double the 6,471 reported last Monday and the highest number on a Monday since the peak of the second wave in early November.