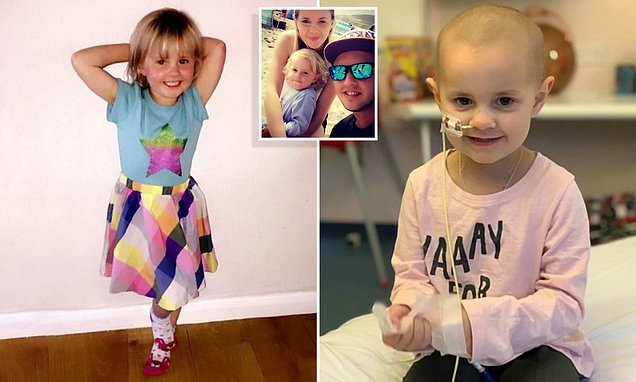 Girl, four, who suffered from nightly stomach aches is diagnosed with a rare cancer which could kill her as her parents desperately try to raise £200,000 for treatment in the US

A girl who kept going to bed complaining of stomach pain was later diagnosed with a rare and potentially deadly cancer.

Cayla Jones, from Cullompton in Devon, has been through intense chemotherapy, surgery and radiotherapy to remove the disease from her body.

First thought to be a urine infection, doctors then found a neuroblastoma tumour which had spread from her stomach to her throat and neck.

The cancer, which struck as Cayla was preparing to start primary school last year, is the same which killed six-year-old Bradley Lowery in 2017.

Her parents Enya Gooding, 23, and Brad Jones, 25, are now trying to raise £200,000 for a treatment in the US to try and prevent the cancer coming back. 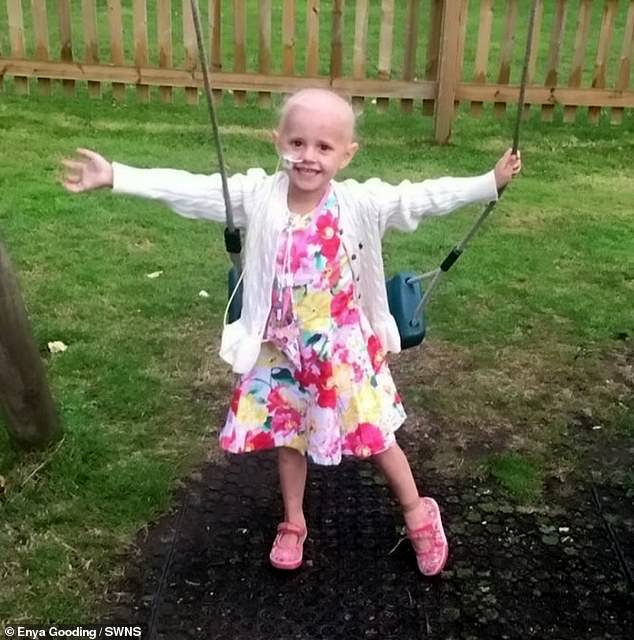 Cayla Jones, from Cullompton in Devon, was diagnosed with stage four stomach cancer in July last year, after doctors initially thought her stomach aches were a urine infection 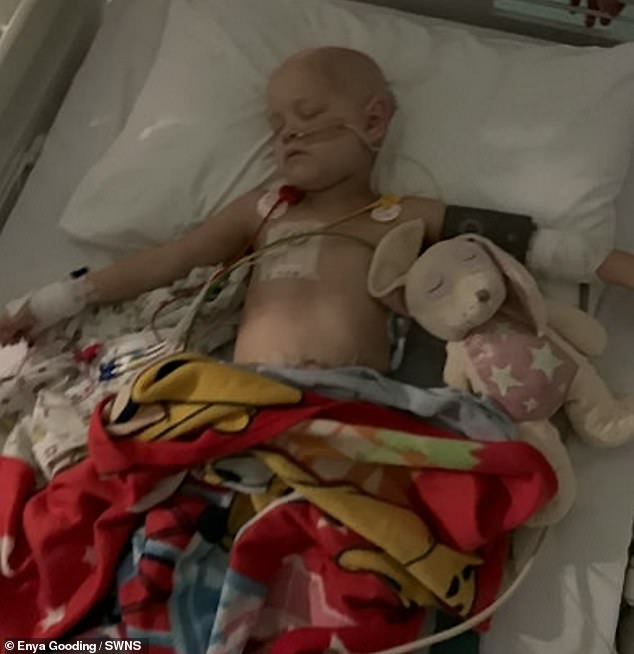 Cayla has been through months of intense chemotherapy, surgery and radiotherapy to tackle the cancer, which spread from her stomach to her throat and neck

Miss Gooding took her daughter to the doctor last year after she complained of a sore stomach for a few nights in a row.

Initially thinking it was a urinary infection, the doctor gave her antibiotics but they didn’t fix the problem.

‘Cayla was fine in the daytime but when it was time to go to bed she’d say she had a sore tummy,’ Miss Gooding said.

‘I thought she was just trying to get away with staying up later at first.’

But after the week-long course of antibiotics finished in July 2018, Cayla was still not back to her normal self.

Miss Gooding said: ‘I explained the antibiotics hadn’t worked and we wondered what else it could be that was causing her stomach issues.

‘There had been a lot of change in Cayla’s life and I worried that that was causing her stress.

‘I’d just had my second baby, Finnley, earlier in the year and Cayla was preparing to start school in September.’

When the family returned to the doctor, he felt Cayla’s stomach a discovered a lump which wasn’t supposed to be there, Miss Gooding said.

He called in a colleague and the two of them discussed what it could be – mentioning the words ‘hernia’ and ‘appendix’ – but nothing could prepare the family for what was to come. 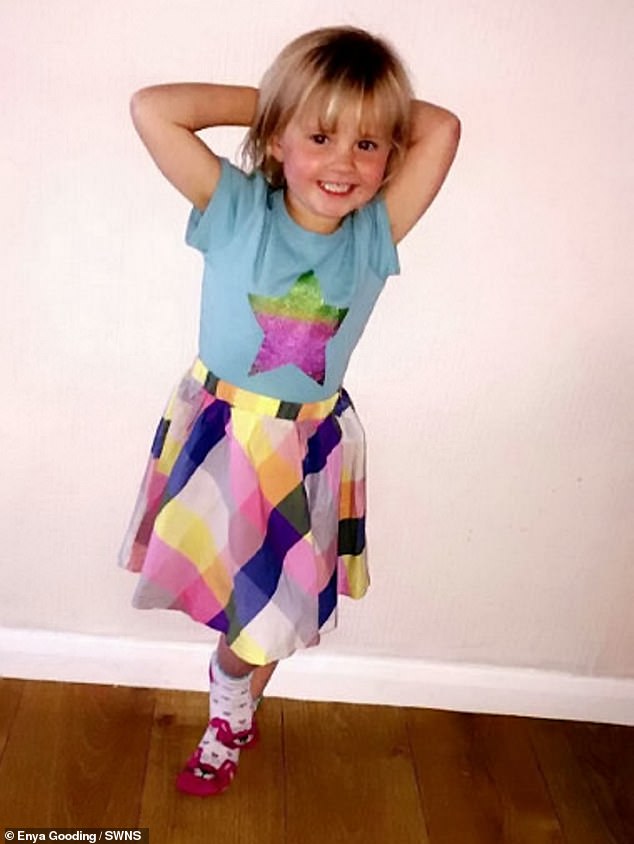 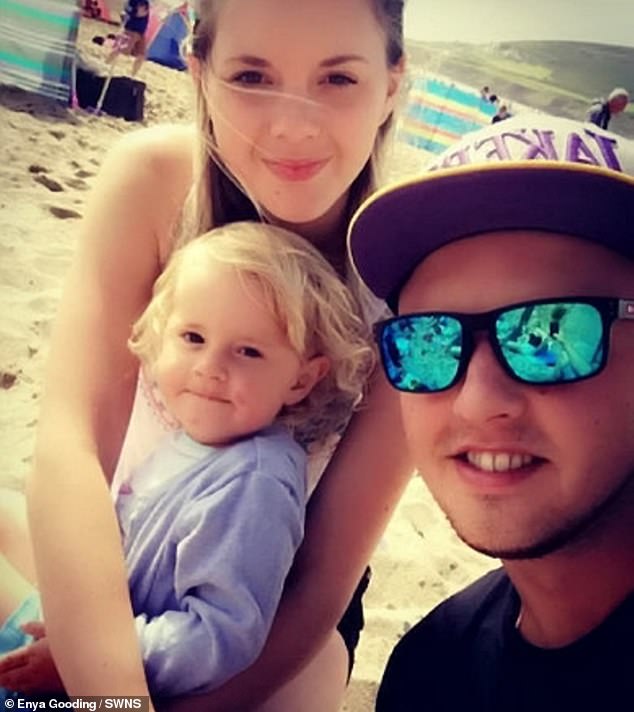 Enya Gooding and Brad Jones at first thought their daughter was pretending to have a stomach ache to try and stay up later but, when her complaints continued, they took her straight to the doctor 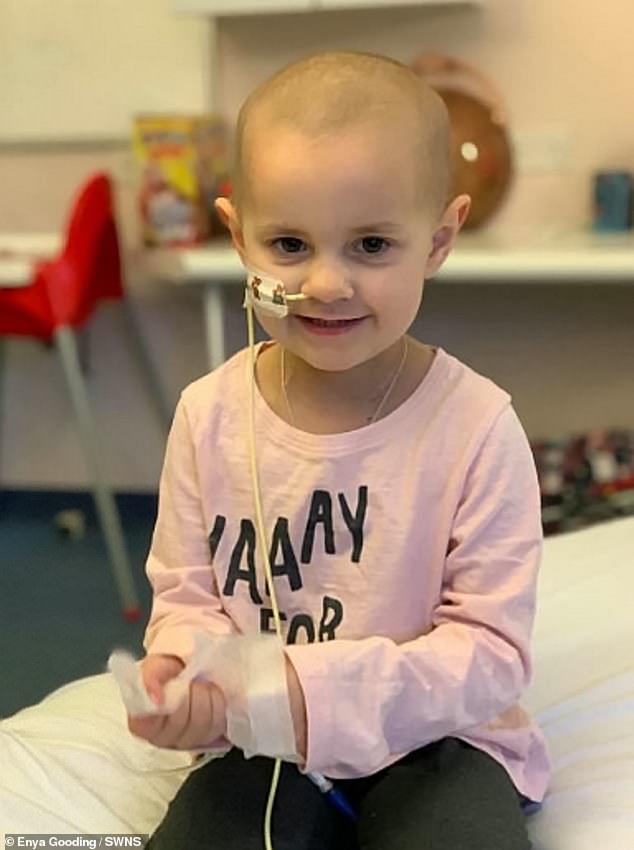 ‘I caught sight of their faces,’ Miss Gooding said, ‘they both had a strange look about them and that was when I started to worry.’

Cayla was admitted to Royal Devon and Exeter Hospital that day and, after blood and urine tests and an ultrasound, an oncologist called the couple into a private room.

Miss Gooding said: ‘My heart sank. I heard them say they’d found a tumour and Brad and I both just broke down, we couldn’t speak.

‘I couldn’t even bring myself to ask any questions, I just tried to pull myself together and put a brave face on for Cayla so as not to scare her.’

The family were transferred to Bristol Children’s Hospital a few days later for further scans and a biopsy of the tumour.

Neuroblastoma is a rare cancer that affects children and usually starts in the abdomen.

Around 100 children, who are typically under five, are diagnosed every year in the UK.

The disease affects approximately 700 new children annually in the US.

In around half of cases, neuroblastoma spreads to other parts of the body, particularly the liver and skin.

Neuroblastoma’s cause is unclear. There may be a family-history link.

The main symptom is usually a lump in the abdomen, which may cause swelling, discomfort or pain.

If the disease affects the spinal cord, it can lead to numbness, weakness and loss of movement in the lower part of the body.

Treatment depends on how advanced the cancer is and the risk it will return after therapy.

Surgery, and chemo and radiotherapy, are commonly used.

Neuroblastoma is a rare cancer of the nerve cells which mainly affects babies and young children – around 100 children in the UK each year.

It is most common in the adrenal glands near the kidneys, the neck, chest, stomach or pelvis.

The cause of the illness is unknown but symptoms include pain in the affected area, extreme tiredness, difficulty swallowing or breathing, bruised skin and weakness.

Scans revealed Cayla’s disease had spread from her abdomen up through her diaphragm muscle and into the lymph nodes in her neck.

Stage four indicates the disease has spread a long way through the body.

Miss Gooding said: ‘We were really lucky that it wasn’t in her bones, which is usually the case with stage four.

‘So that meant we didn’t have to wait to clear out her bones before starting treatment.’

Cayla started chemotherapy on July 19, having eight rounds in 70 days.

By the fourth round the tumours in her neck had disappeared completely and the main tumour in her stomach had shrunk.

Miss Gooding said: ‘At the end of the 70 days her white blood cell count had flatlined and she had to be in isolation for three weeks because her immune system was so weak.

‘It was really tough because we had the baby too, so trying to juggle everything was never easy, but we got through it.’

An MRI showed two thirds of the stomach tumour had disappeared, and Cayla had an eight-hour operation which successfully removed around 80 per cent of what remained.

Doctors then harvested stem cells from Cayla’s bone marrow, which can be used further down the line to replace cells destroyed during treatment. 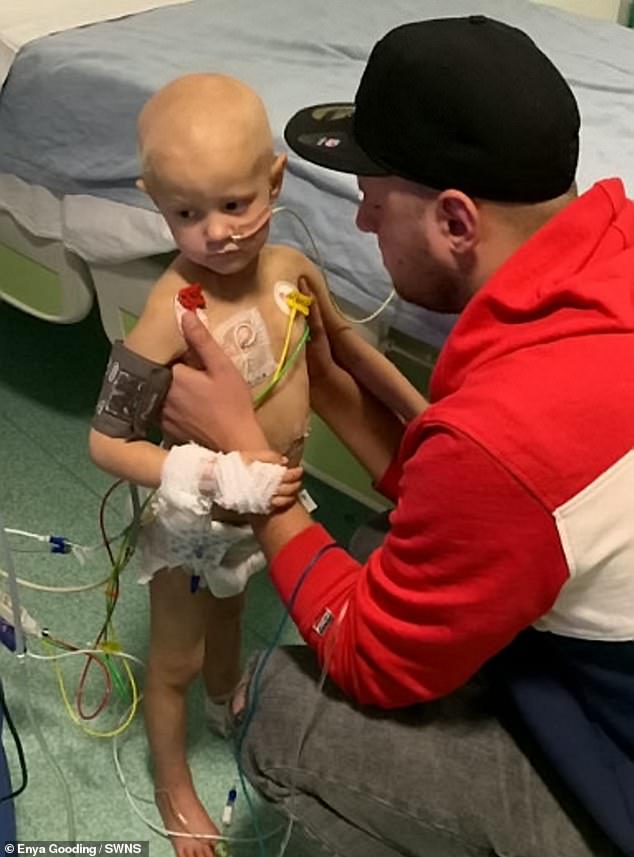 Doctors have successfully removed large amounts of Cayla’s cancer and she will have scans later this month to see whether she is in remission yet – the family are trying to raise £200,000 to take her to the US for a private treatment to prevent the disease returning

Miss Gooding said: ‘She was in hospital in Bristol for two days and in the first day alone they got five million cells, which was amazing.

‘When she got home from that she was so well – her appetite was better than before she was ill! It was lovely to see her like it.’

Cayla went through a further week of high dose chemotherapy and was discharged on December 17.

She will have scans later this month to see if she’s in remission, before a final round of radiotherapy.

Now her parents are fundraising to send her to the Memorial Sloan Kettering Cancer Center in New York, which offers a vaccine which can lower the chances of cancer coming back. 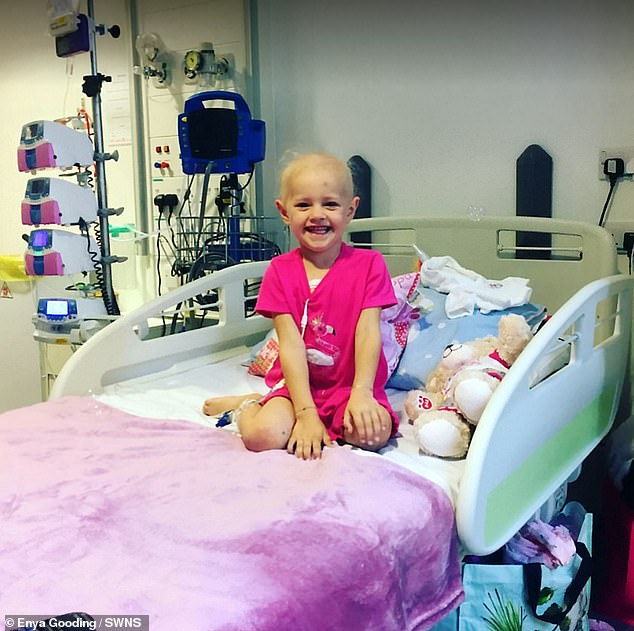 Cayla has been suffering from neuroblastoma, a rare type of cancer affecting nerve cells and most common among babies and small children – most patients are younger than five 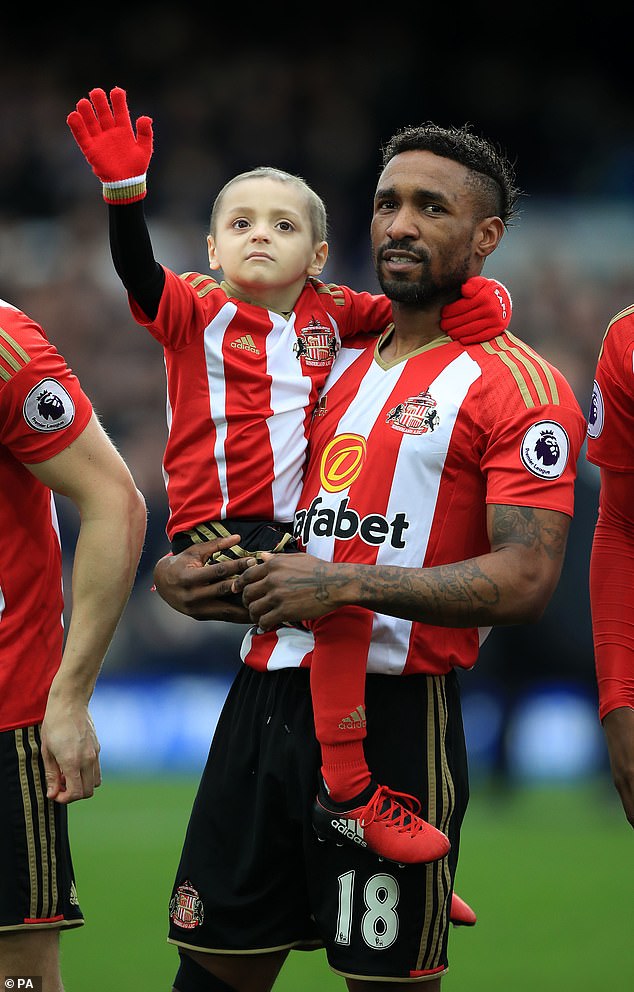 Six-year-old Bradley died of neuroblastoma in 2017 and his family are now helping others fundraise for treatment not available on the NHS.

Miss Gooding said: ‘When we first got the diagnosis I did the worst thing possible and went online.

‘Aside from all the awful facts and statistics, I found information on the [treatment in the US] and the success rate was 85 per cent.

‘The odds of the cancer coming back in the first six months are 50/50 so we started an online fundraiser soon after with the help of the Bradley Lowery Foundation.

‘They have been such a huge help directing us with our fundraising, and the team there can completely relate to what we’re going through as they’ve been through the same process.

‘All we want is to give our daughter the best chance at living a long, healthy life just like any other parent.’