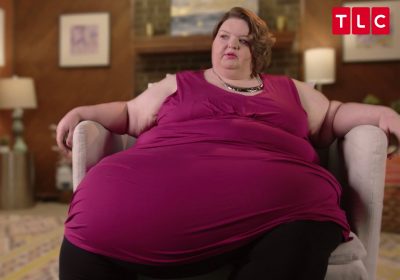 Two years after getting diagnosed with endometrial cancer, Amanda Johnson is finally focused on losing weight and can start her treatment.

The Family by the Ton star, 37, had to postpone her cancer treatments because at 650 lbs., she was too heavy to safely undergo radiation or have a hysterectomy. But she’s since had a vertical sleeve gastrectomy and is ready to shift her focus from losing weight to treating her cancer.

“I was diagnosed with cancer about two years ago. At this point I’ve lost enough weight to be able to have an ultrasound to see the status of the endometrial cancer and see if it’s spread and if it’s grown, or if it’s the same as it was before,” Johnson says in this exclusive clip from Wednesday’s episode. “If it’s spreading then I’ll have even less time to lose the weight than I thought.”

Though she was happy to finally start improving her health, Johnson worried about the ultrasound.

“I’m super nervous because I don’t know how it’s going to go,” she says. “The first time I had an ultrasound there was a lot of people in the room who had to hold up my stomach. I’m just hoping that with me losing weight it won’t be as much of a production and I can just kind of be normal.”

And Johnson was proud to say that this ultrasound went much more smoothly than her last.

“I still have a stomach that hangs, but I was able to hold my stomach up so she could get under to do the examination,” she says. “I didn’t have to have other people in there to help. So I’m really happy with that.”

Johnson has already made enormous strides from where she was at the start of the season. At that point she was still debating weight loss surgery and largely confined to her house, while worrying about her health.

“Every day that I don’t do something about my weight is one second and step closer to the grave for me,” she said in the first episode. “Now it’s either surgery or death.”

After her surgery, Johnson is now down 91 lbs. and said that she’s feeling great.

“It’s very exciting, because I know that the surgery worked; that I didn’t go through all of this for nothing.”