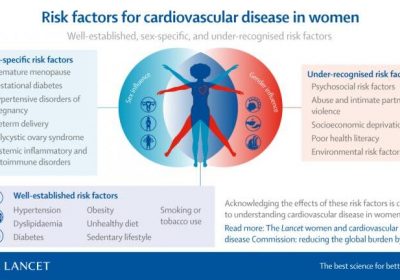 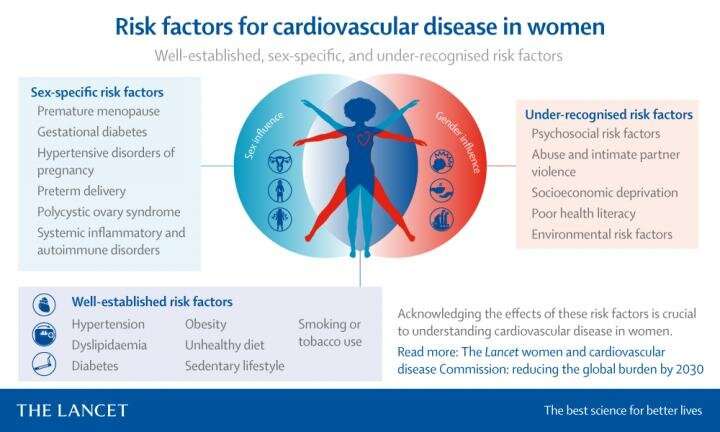 The Lancet women and cardiovascular disease Commission outlines 10 ambitious recommendations to improve health outcomes for millions of women around the world and achieve the global targets set.

In the first-ever global report on cardiovascular disease (CVD) in women, researchers call for urgent action to improve care and prevention, fill knowledge gaps, and increase awareness to tackle the worldwide leading cause of death among women. The all female-led Commission report was published in The Lancet and presented during a plenary session at the American College of Cardiology’s 70th Annual Scientific Session (ACC.21).

The Lancet women and cardiovascular disease Commission: reducing the global burden by 2030 is authored by 17 leading experts from 11 countries. The Commission aims to help reduce the global burden of cardiovascular conditions—including heart disease and stroke—that account for 35% of deaths in women worldwide by 2030. The Commission’s calls to urgently address and reduce CVD in women align with the United Nations Sustainable Development Goals (SDGs) which aim to reduce premature deaths from non-communicable diseases, including CVD, by one-third by 2030.

The authors have outlined 10 ambitious recommendations to tackle inequities in diagnosis, treatment, and prevention to reduce CVD in women, including educating health care providers and patients on early detection to prevent heart disease in women; scaling up heart health programs in highly populated and underdeveloped regions; and prioritizing sex-specific research on heart disease in women and intervention strategies.

The global burden of cardiovascular disease in women

The Commissioners report data from the 2019 Global Burden of Disease Study [3] for the first time to describe the extent of cardiovascular disease in women worldwide, including disease prevalence, mortality, and risk factors.

In 2019, there were approximately 275 million women around the world with CVD, with global age-standardised prevalence estimated at 6,402 cases per 100,000. The leading cause of death from CVD worldwide in 2019 was ischemic heart disease (47% of CVD deaths), followed by stroke (36% of CVD deaths). There are considerable geographical differences in CVD, with the highest age-standardised prevalence in Egypt, Iran, Iraq, Libya, Morocco, and United Arab Emirates, while the countries with lowest prevalence are Bolivia, Peru, Colombia, Ecuador, and Venezuela.

Although globally the prevalence of CVD in women has been declining, with an overall decrease of 4.3% since 1990, some of the world’s most populous nations have seen an increase in CVD, including China (10% increase), Indonesia (7%), and India (3%). These increases indicate a need for initiatives to expand prevention, diagnosis, and treatment of CVD in women who live in highly populated and industrialising regions.

High blood pressure is the greatest risk factor contributing to years of lost life from CVD in women, followed by high body mass index and high LDL cholesterol. While these well-established risk factors might affect women differently than men, there are sex-specific risk factors such as premature menopause and pregnancy related-disorders that must be more widely recognized and prioritized as part of treatment and prevention efforts worldwide.

The Commissioners highlight a number of under-recognised CVD risk factors that also require attention. These include social factors—such as unemployment—linked to anxiety and depression, and disparities based on socioeconomic and cultural status, race, and poverty. Among their recommendations are a greater focus on mental health in clinical practice, and targeted policy work to support low socioeconomic status populations in developed and emerging countries.

Professor Bairey Merz, of the Cedars-Sinai Medical Center, USA, says: “While some risk factors for CVD are similar for women and men, women are more likely to suffer from health disparities due to cultural, political or socioeconomic factors. For instance, some social or religious norms—such as restrictions on participation in sport and physical activities—can contribute to CVD in women, highlighting an urgent need for culturally appropriate initiatives that are tailored to different regions and populations.”

The Commission also highlights the need to increase awareness of CVD risk in women among physicians, scientists, and health care providers, and that there is an unmet need for CVD prediction models that include sex-specific risk factors.

Interventions to reduce CVD should be tailored for the most vulnerable populations globally, including women from minority or indigenous populations and those whose roles in society are strongly defined by traditional or religious norms. However, it is also important to reach groups not typically viewed as being at high risk, such as young women—a group in which heart attacks and smoking rates are increasing. In the past decade, 53 (27%) of 195 countries and territories recorded significant decreases in the prevalence of smoking among men, while only 32 (16%) recorded significant reductions for women.

Despite a vital need for knowledge about sex-related differences in optimal treatment and improved outcomes in patients of both sexes, women have long been under-represented in CVD clinical trials. The Commissioners recommend a number of strategies to include more women, including addressing barriers to participation—such as family care issues—adopting more inclusive enrolment criteria, and educating recruitment staff on the importance of involving women in trials.

Professor Liesl Zuhlke, of Red Cross Children’s and Groote Schuur Hospitals and the University of Cape Town, South Africa, says: “The momentum to strive for equity and equality more broadly for women socially and culturally translates to an extraordinary time to channel that same energy into improving women’s health. Being the leading killer of women globally, CVD must take precedence for our attention and action. This Commission’s work is both a starting point and a call to action to mobilise and energise health care professionals, policymakers—and women themselves—to work toward a healthier future.”

The Commissioners acknowledge some limitations to their report. As this was a report aiming to capture sex-related differences in cardiovascular disease, and not a systematic review, a bias towards highlighting evidence for sex-related disparities over neutral findings cannot be excluded. There was only limited assessment of the important distinction between sex and gender in the report, in part because the terms are often used interchangeably in the literature. The limited availability of quality data on transgender women also meant the Commission was unable to investigate cardiovascular health for this group. Overall evidence presented in the report may be dominated by data from white women and developed countries, reflecting the current availability of more robust data from these populations and regions. More research to explore all these factors is needed.