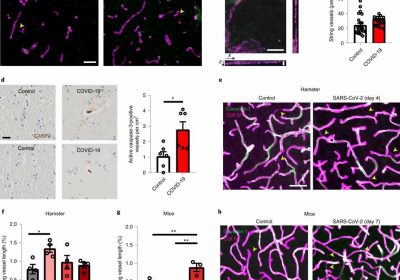 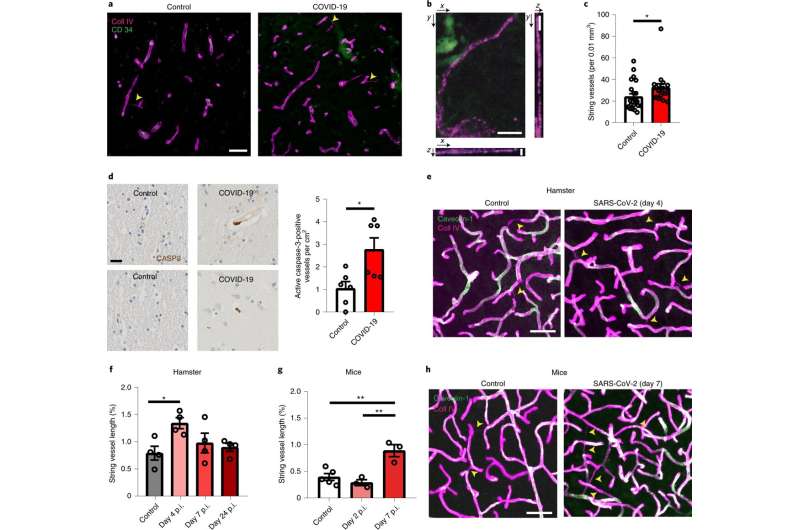 A team of researchers affiliated with a large number of institutions in Germany, one in France and one in Spain has found evidence that the SARS-CoV-2 virus attacks brain endothelial cells. In their paper published in the journal Nature Neuroscience, the group describes their study of the brains of people who died of COVID-19.

Both anecdotal evidence and work by teams studying the impact of the SARS-CoV-2 virus on the human body reveal evidence of neurological problems after an infection. Patients have reported a loss of taste and/or smell, and some have experienced what they describe as brain fog. A few have even had strokes or seizures, and many have experienced confusion. Up to now, there has been no physical evidence of the virus attacking cells in the brain, however, which has led researchers to assume that symptoms are the result of inflammation in the brain in response to infection. In this new effort, the researchers have found evidence that the virus attacks endothelial cells in the linings of capillaries that make up the blood/brain barrier—the first evidence of a direct effect of the SARS-CoV-2 virus on vessels in the brain. The result of such attacks has been death of the cells and blockage of blood flow into the brain.

The work involved studying cerebral vascular endothelial cells, the cells that line the capillaries in the blood/brain barrier, from people who died of COVID-19. The researchers found evidence of dead cells, which resulted in what they describe as ‘ghost vessels’—capillaries through which no blood can flow, leading to damage in the brain due to oxygen and glucose starvation. More specifically, they found that the virus could split a protein in the endothelial cells, which resulted in the death of the cell and the destruction of the blood vessel—a process called necroptosis.