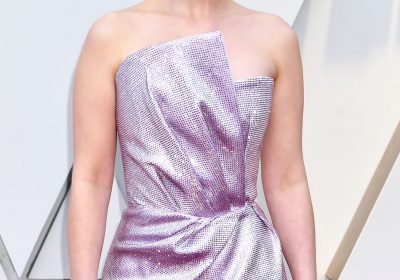 Emilia Clarke shared the shocking news in March that she had undergone two secret, life-saving brain surgeries for aneurysm growths, but the Game of Thrones star said Wednesday that she nearly backed away from revealing her truth.

Clarke, 32, had kept quiet about the brain surgeries for years — her first aneurysm occurred in 2011 leading to surgery, and she required another, near-fatal surgery in 2013 for the second aneurysm — but she said she was always afraid the news would leak without her consent.

She finally decided to tell her story in an essay for the New Yorker, but, “Two weeks before, I was like, ‘I don’t think I can do it,” Clarke told Extra at the premiere of the final season of Game of Thrones in New York City on Wednesday night.

“You just want people to think you can do the job that they gave you cause my God there are 20,000 other women that can do it as well,” she explained. “Yes, we are still fighting that fight, so showing any weakness is frightening.”

Clarke said she ultimately chose to open up to help other people.

“I knew that I had to tell this story because I wanted people who are suffering from it to know that this is also what brain injury looks like, and that you can do it,” she said. “I wanted people to not feel alone if they did. I knew it was my duty, but it’s hard.”

Clarke’s first aneurysm occurred in Feb. 2011, soon after she wrapped filming on the first season of HBO’s hit show. She was in a workout class when she started feeling “shooting, stabbing, constricting pain” in her head and was rushed to the hospital for a three-hour surgery.

Two weeks after the surgery, she was unable to remember her name, which sent Clarke to a dark and emotional place.

“I was suffering from a condition called aphasia, a consequence of the trauma my brain had suffered,” she wrote in the essay. “In my worst moments, I wanted to pull the plug. I asked the medical staff to let me die. My job — my entire dream of what my life would be — centered on language, on communication. Without that, I was lost. I was sent back to the I.C.U. and, after about a week, the aphasia passed. I was able to speak.”

Clarke regained most of her normal functions and returned to film the show’s second season, but she struggled and “every minute of every day I thought I was going to die,” she said. Plus, doctors had warned that she had another, smaller aneurysm on the other side of her brain that could “pop” at any time. In 2013, a brain scan showed that it had doubled in size and it was time for a second, non-invasive surgery. But it didn’t go as planned.

“When they woke me, I was screaming in pain. The procedure had failed,” she wrote. “I had a massive bleed and the doctors made it plain that my chances of surviving were precarious if they didn’t operate again. This time they needed to access my brain in the old-fashioned way — through my skull. And the operation had to happen immediately.”

The more invasive surgery worked, though the recovery “was even more painful” than the first time around, and Clarke “lost all hope” at times.

“I couldn’t look anyone in the eye. There was terrible anxiety, panic attacks … I felt like a shell of myself. So much so that I now have a hard time remembering those dark days in much detail. My mind has blocked them out. But I do remember being convinced that I wasn’t going to live.”

But she steadily improved, and “in the years since my second surgery I have healed beyond my most unreasonable hopes,” Clarke said. “I am now at a hundred percent.”