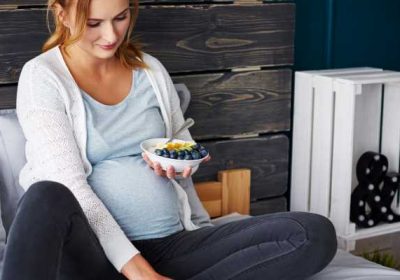 There aren’t many diets that get the green light during pregnancy. Trying to lose weight can be downright dangerous for both mum and bub, especially since many eating regimes involve cutting back on entire food groups that can contain vital nutrients that support the baby’s growth. There is, however, one exception: the Mediterranean diet.

In a clinical trial led by researchers from the University of Warwick and Queen Mary University in the UK, women who followed the Mediterranean diet had a 35 per cent lower risk of developing gestational diabetes. In addition, they gained 1.25kg less weight during the antenatal period compared to women who had consumed other diets.

The findings – first published in the journal PLOS Medicine – also suggested that those who suffer from a range of other health conditions, including chronic hypertension and raised lipid levels may benefit.

Of the 1,252 pregnant women took part in the study, all had at least one metabolic risk factor such as obesity, high blood pressure or hypertriglyceridemia. That meant they had a higher chance of developing complications during their pregnancy, such as heart disease, diabetes and stroke. In total, 593 expectant mothers followed the diet, while 612 were used as the control group.

“This is the first study to show that pregnant women at high risk of complications may benefit from a Mediterranean-style diet to reduce their weight gain and risk of gestational diabetes,” Professor Shakila Thangaratinam, from Queen Mary University of London said. “Implementing this diet seems to be effective and acceptable to women.”

“Women who are at risk of gestational diabetes should be encouraged to take action early on in pregnancy, by consuming more nuts, olive oil, fruit and unrefined grains, while reducing their intake of animal fats and sugar.”

You can find out more about what the Mediterranean diet involves here.

This Eating Regime Was Just Named The ‘Best’ Diet Of 2019