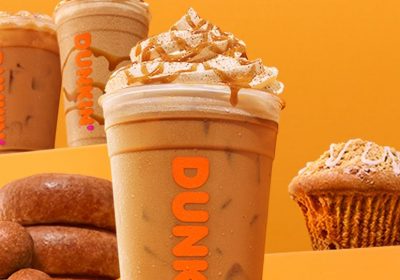 Breaking news for pumpkin spice enthusiasts: Dunkin’ Donuts released its new Cinnamon Sugar Pumpkin Signature Latte today, and as you can imagine, the nutritionals are off the sugar charts. The latte is just one item on Dunkin’s full fall 2019 menu, where apple cider donuts and munchkins also make their big debut. The classic pumpkin-flavored coffee? That’s on the menu, too.

What’s the rush to get this fall menu out the door? In a press release, Dunkin’ says its customers’ passion for pumpkin is on the rise, as annual sales for pumpkin-flavored products rose 15.5 percent in 2018. We also have a teeny, tiny suspicion that it’s also a reaction to Starbucks’s announcement earlier this week, noting that it’s bringing back the beloved pumpkin spice latte next Tuesday, August 27.

The Cinnamon Sugar Pumpkin Signature Latte is available hot or iced and is made with similar ingredients to Dunkin’s signature iced lattes: milk blended with freshly brewed espresso. According to Dunkin’s site, the latte features pumpkin and cinnamon flavors and is topped with whipped cream, a caramel drizzle, and a cinnamon sugar topping. If you’re ordering it hot, the milk is steamed to make a frothy topping.

It’s not clear what ingredients give this latte its pumpkin and cinnamon flavors. Whether the drink is made with actual pumpkin or pumpkin spice (ground cinnamon, ginger, nutmeg, allspice, and cloves), we can’t confirm … yet.

Like all of Dunkin’ Donuts’s coffee drinks, you can order a small, medium, or large Cinnamon Sugar Pumpkin Spice Signature Latte. When ordering a medium latte with whole milk, this is what you can expect on the nutrition front:

The wait is almost over… 🎃 tomorrow.

With 14 grams of fat and 55 grams of sugar, it doesn’t really belong in the same sentence as “healthy” and should be enjoyed only on special occasions, says Bonnie Taub-Dix, RDN, creator of BetterThanDieting.com, and author of Read It Before You Eat It. “To put it this into perspective, one pat of butter or one teaspoon of oil has five grams of fat alone, so having this drink is like having three pats of butter,” Taub-Dix says. “One packet of sugar is four grams of sugar, so you would essentially be having 13 packets of sugar in one drink.”

Erin Palinski-Wade, RD, CDE, LDN, CPT, author of the 2-Day Diabetes Diet, agrees that you should skip this beverage. “Although ‘cinnamon’ and ‘pumpkin’ sound like nutritious choices, this drink contains the equivalent of 14 teaspoons of sugar, which is even higher than a 16-oz. bottle of regular soda! That’s 1/5 times more than the recommendation of having no more than 8-10 teaspoons of added sweetener per day,” she says.

Even though you’re getting about 12 grams of natural sugar added from milk, the rest of the sugar content is most likely coming from the added sugars in whipped cream, caramel drizzle, and the cinnamon sugar topping, Palinski-Wade says.

Both Taub-Dix and Palinski-Wade say you’re better off skipping this drink, but if you’re absolutely craving it, order the small with skim milk and ask them to hold off on the cinnamon sugar topping and whipped cream. Add your own sprinkle of ground cinnamon instead. “Even better, ask for the small hot latte with skim milk topped with a sprinkle of cinnamon for a fall treat that provides only 70 calories,” Palinski-Wade says.