Do Biologics Protect Against Cancer Progression in IBD? 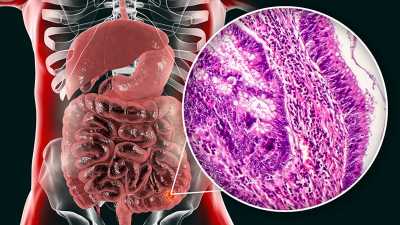 Treatment with a biologic agent was associated with a lower risk of advanced inflammatory bowel disease (IBD)–associated cancer in patients with ulcerative colitis (UC) but not Crohn’s disease (CD) in an observational study conducted in Japan.

It’s generally considered that biologics do not change the risk of cancer, and whether they lower the risk remains unclear, write Ryo Seishima, MD, PhD, with Keio University School of Medicine in Tokyo, and colleagues. However, few studies have focused on cancer progression, namely, the risk of advanced-stage cancer.

To investigate, researchers reviewed the medical records of 828 patients with UC and 214 with CD who were diagnosed with IBD-associated intestinal neoplasia (dysplasia or cancer) from 1983 to 2020.

None of the drug types were significantly associated with cancer stage in the CD cohort, they report.

In multivariate analysis that was adjusted for age, diagnosis year, regular surveillance, and histologic type in UC, biologics (odds ratio [OR] 0.11; P < .001) and 5-ASA (OR 0.63; P = .041) were significantly associated with a lower risk of advanced-stage cancer.

The study was published online January 9 in The American Journal of Gastroenterology.

“These results indicate that biologics and 5-ASA are drugs that are potentially associated with a lower risk of advanced cancer in patients with UC but not with CD,” Seishima and colleagues say.

They also suggest that the mechanism of cancer progression in UC and CD may differ and needs to be investigated further.

The study is “interesting and reassuring, but there are a lot of limitations with the study design,” said Ashwin Ananthakrishnan, MD, MPH, with Massachusetts General Hospital and Harvard Medical School in Boston, Massachusetts, who was not involved in the research.

“By focusing only on those who have been diagnosed with cancer, one cannot actually conclude what the risk of cancer is and if these medications reduce the risk of colon cancer, which is a far more important and interesting question,” he told Medscape Medical News.

Patients undergoing treatment with biologics likely receive closer follow-up, so in these patients, cancers are less likely to be diagnosed at an advanced stage, said Ananthakrishnan. For that reason, the study can’t clearly establish the degree to which the effect was due to medication or surveillance, he added.

As for whether biologics affect the overall risk of cancer development, the study doesn’t change “current thinking that biologics are safe in this setting,” he added.

“Prior research has shown that the risk of uncontrolled inflammation outweighs the risk of our current medications,” Forster, who was not involved in the research, told Medscape Medical News.

The study had no specific funding. Seishima, Ananthakrishnan, and Forster have disclosed no relevant financial relationships.