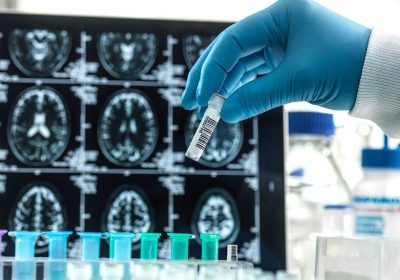 At present, little can be done to reverse brain damage in patients with dementia, but brain cell transplants could be a way to mitigate the disease. The US team at Northwestern University have turned stem cells into neurons, which they say could replace damaged or lost brain cells, potentially restoring cognition.

Previous attempts to create neurons have stalled because the cells remained immature, meaning they were unable to perform complex signalling.

Professor Samuel Stupp explained to The Telegraph: “When you have a stem cell that you manage to turn into a neuron, it’s going to be a young neuron.

“But, in order for it to be useful in a therapeutic sense, you need a mature neuron.

“Otherwise, it is like asking a baby to carry out a function that requires an adult human being.”

The professor of materials science, chemistry, and medicine, added: “Mature neurons are better able to establish the synaptic connections that are fundamental to neuronal function.”

The artificial environment mimics what the neurons would be exposed to over time while maturing in the body.

The more rapidly the molecules moved, the more mature the neurons became.

Now there is the opportunity for scientists to create a bank of healthy neurons for transplant into the brain, for example.

The team believe this approach could provide a promising therapy to dementia patients, as well as those who have other neurodegenerative diseases.

“Some researchers think that stem cell therapies could one day replace damaged brain cells and restore people to perfect cognitive health, but this is well beyond our current capabilities.

“The brain is an extremely complex organ and Alzheimer’s doesn’t just impact one type of nerve cell or a specific region of the brain.”

Professor Wray elaborated on her doubts for an imminent treatment: “Each individual nerve cell in the brain can have thousands of connections to other cells.

“The total number of these connections reaches hundreds of trillions. While the prospect of stem cell therapies for Alzheimer’s is tantalising, there are huge challenges to this approach.”

She stated: “Even if we were able to promote the growth of new cells that directly replace those damaged by Alzheimer’s – unless we also tackle the disease processes, the newly grown cells would also become damaged.

“So there’s a long road ahead before stem cell based therapies could reach people with diseases like Alzheimer’s.”

Further doubt was cast on the research by research information for the Alzheimer’s Society, Sian Gregory.

Sian Gregory expressed there is “no evidence so far” that the cells created in the laboratory will work as an effective treatment for dementia.

However, she did say that the advancement in research is “exciting” as the new brain cell creation tool could be used to “better understand the diseases that cause dementia”.

The research was published in the journal Cell Stem Cell.