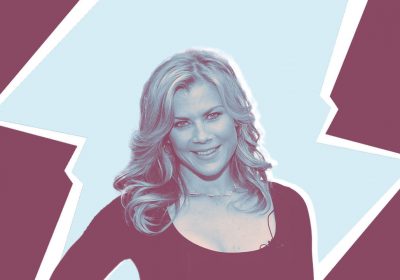 A few weeks ago, Ali Sweeney went to her dermatologist for a routine visit. As she and her doctor were chatting, Sweeney mentioned in passing that a pesky bump had recently appeared on her nose. It just looked like a pimple, she explained, but it wouldn't go away. To Sweeney's surprise, her doctor was immediately concerned.

After having the bump biopsied, the Days of Our Lives star got a call from her doctor: It was skin cancer.

"It was really alarming. My doctor explained that it had been hiding underneath the surface for awhile," Sweeney, 42, tells Health. "Seeing something appear on your skin isn't at all to say that it's brand new, and learning that was a big wake-up call for me."

The type of skin cancer Sweeney had is called basal cell carcinoma, meaning it starts in the basal cells, which line the epidermis (the outer layer of skin). Basal cell carcinoma is the most common form of skin cancer, according to the Skin Cancer Foundation, with more than 4 million cases diagnosed each year in the US. It’s typically found in those with fair skin, blonde or red hair, and green, blue, or gray eyes (like Sweeney).

Fortunately, basal cell carcinoma is generally the least dangerous of the three main types of skin cancer (the other two are melanoma and squamous cell carcinoma), and it rarely metastasizes.

So, I just got off the phone with my dermatologist. Kind of a bummer, but turns out I need to have a small bump removed from my nose that came up positive for skin cancer. She assured me that we caught it early and I just wanted to share her advice: Check your skin for any noticeable changes and ask your doctor about it!! Even if it seems like nothing, let an expert decide. Early detection of skin cancer gives you the greatest chance for successful skin cancer treatment, and prevents it from developing into something more complicated. And of course – use sunscreen (which I do!!). ☀️ #advice #sunscreen #skincancerawareness #sun #outdoorliving

To treat the cancer, Sweeney had Mohs surgery, a procedure that has a surgeon first remove the visible spot and then takes away the surrounding tissue layer by layer. The surgeon examines each layer under a microscope to check for cancerous cells. The surgeon will repeat this until all cancer cells have been removed.

"My doctor said it was a bit tricky to get it all out, and that really hit home for me," Sweeney says, "but he's confident that he was able to."

Doctors have always told her that needs to be vigilant about checking for skin changes, she continues, because she has fair skin and her mother also had skin cancer. She always tried to do just that, but she was on the lookout for larger, darker marks and moles. She didn't realize that a small, pink, zit-like bump could be cause for concern.

"My doctor suggested that you check your whole body once a week when you get out of the shower for any changes at all on your skin," she says. "Make an appointment with yourself. Make it a priority."

As she said in an Instagram post about her diagnosis last month, "Even if it seems like nothing, let an expert decide. Early detection of skin cancer gives you the greatest chance for successful skin cancer treatment, and prevents it from developing into something more complicated."