Home » Health News » Chemicals in Sunscreen Are Seeping Into Our Blood. Here’s What That Means

Chemicals in Sunscreen Are Seeping Into Our Blood. Here’s What That Means 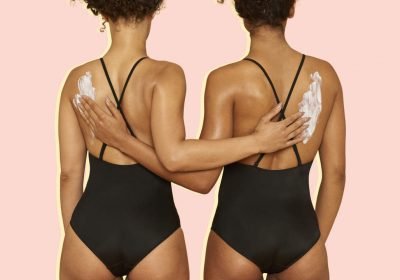 We know you’ve been told all your life to slather on the sunscreen before a day spent outside. We’re not disputing that advice, but a new report in the Journal of the American Medical Association has given us some food for thought: There’s a chance that sunscreen could potentially be dangerous.

Here’s how: Sunscreen ingredients can travel through the skin and build up in the bloodstream, the new report suggests. This finding has raised concerns about how sunscreen might affect reproductive and developmental health and whether it can cause cancer, according to an editorial accompanying the new report.

For the new study, scientists from the U.S. Food and Drug Administration (FDA) studied the effects of sunscreen on 24 healthy people. They tested four different sunscreens—two sprays, one lotion, and one cream—each applied four times a day, to 75% of the body surface, for four days.

Blood samples were then taken from the participants to determine how much of four specific sunscreen ingredients—avobenzone, oxybenzone, ecamsule, and octocrylene—ended up in their bloodstreams. And it turns out, it was a significant amount.

A bit of background: The FDA recommends that any active ingredients in sunscreen with “systemic absorption greater than 0.5 ng/mL” should undergo toxicology studies, including research on developmental, reproductive, and cancer-related health issues. And sure enough, all four of those ingredients were found at levels greater than that FDA benchmark—some at levels six or even eight times higher.

That certainly sounds concerning. But before we freak out about how much sunscreen we’ve been putting on for the last 10 years, let’s consider a few key aspects of this new research. First, the number of participants evaluated—24—is quite low, and the results only showed blood levels of these chemicals over the course of one week.

Second, the report isn’t claiming that these chemicals are actually unsafe, or that sunscreen should be pulled from supermarket shelves. In fact, it doesn’t even recommend throwing your sunscreen out. “These results do not indicate that individuals should refrain from the use of sunscreen,” it says.

What the report does say is that we need to know more. “The systemic absorption of sunscreen ingredients supports the need for further studies to determine the clinical significance of these findings,” the authors wrote. The accompanying editorial points out that further testing could be especially important for babies, “whose skin may absorb substances at differential rates.”

Those FDA studies haven’t been super promising, either: In 2014, an advisory panel concluded that there wasn’t enough evidence to state unequivocally that certain sunscreen ingredients are safe.

Dermatologists, however, still say that lathering up before spending time outdoors is a must—despite these new concerns. “Sunscreen is one of the major components of sun protection,” Noelani González, MD, an instructor of dermatology at the Mount Sinai Icahn School of Medicine in New York City, tells Health. According to the Skin Cancer Foundation,

daily use of a sunscreen with SPF 15 or higher reduces the risk of developing melanoma—the deadliest form of skin cancer—by 50%.

Plus, says Dr. González, no clinical studies have actually linked sunscreen use to any of the potential dangers mentioned in this new study. “At this point we don’t necessarily know that [the ingredients analyzed in the new report] are worrisome,” she says. “It’s a very good starting point for us as physicians to investigate, but it’s early on.”

So what does this mean for you when you’re packing your beach bag? You should definitely still throw in the sunscreen. If you’re concerned about ingredients like oxybenzone, you might want to consider products with physical or mineral blockers (rather than chemical blockers) like zinc oxide and titanium dioxide, which aren’t absorbed by the skin and are considered safe by the FDA.

But until we know more, says Dr. González, any sunscreen is still better than none at all. The authors of the editorial agree, saying that avoidance of sunscreen as a result of this study “could have significant health implications.” They also point out that wearing sunscreen should be just one part of a larger sun-protection plan—one that also includes wearing protective clothing, hats, and sunglasses when spending time outside, and seeking shade when the sun is strongest.