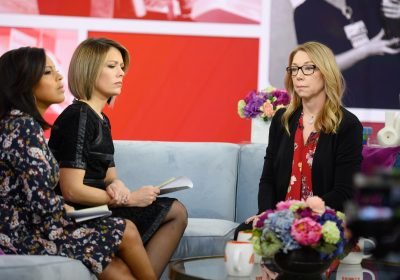 A cardiac nurse who suffered a heart attack after ignoring her symptoms for days is warning people not to make the same mistakes.

Jennifer Gaydosh has been a cardiac nurse for eight years, meaning she’s well-versed in knowing that a symptom such as arm pain could be an indicator of a heart attack.

But that didn’t stop her from ignoring that pain for 36 hours last February – a move that could have cost her her life after she discovered she’d actually suffered from SCAD, or spontaneous coronary artery dissection.

Gaydosh told the Today show Wednesday that she paid a visit to the ER after she awoke one night with pain down her left arm, cold sweats and nausea.

“Given that I have no risk factors, they discharged me from the hospital and said, and this is key, please come back if you have a return of symptoms,” she said, noting that test results also gave her a clean bill of health.

When the pain did return days later, Gaydosh says, she ignored the advice, finding the symptoms more annoying than anything else.

“I see it all the time, people talk themselves out of symptoms and I always roll my eyes at them, but now I understand it’s really easy to convince yourself that you’re fine,” she said.

Eventually, she returned to her doctor for an ultrasound, which confirmed she’d had a heart attack.

“If I had waited much longer, I might not have survived,” said Gaydosh, who works at Rose Medical Center in Denver, according to Prevention. “I should’ve known better.”

The type of heart attack Gaydosh suffered mainly affects women, and is commonly seen in pre-menopausal women and new moms, causing doctors to believe there is some type of hormonal factor to its cause.

“I think we do a good job of getting the warning signs out there. Women know, oh, pain down the arm, jaw pain,” she explained. “(But) the key on us is to not ignore it. And I had that little spidey sense, but I was ignoring it.”

She also encouraged anyone who was experiencing symptoms but debating whether to visit the emergency room that they were better safe than sorry.

Heart disease is the leading cause of death among men and women worldwide, according to the American Heart Association.

Heart attack symptoms include chest discomfort, discomfort in upper body areas like arms, the neck and the jaw, shortness of breath and cold sweats, nausea and lightheadedness.

Symptoms vary between men and women, and women are more likely to experience the symptoms other than chest pain.