Cancer: Prescription drug to help relieve acute pain could be increasing your risk 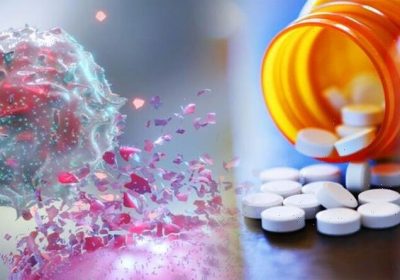 In a study published in Annals of Oncology, the role of opioids in cancer progression was investigated.

The study noted: “Associated with the widespread use of opioids from many different settings, an increasing number of long-term consequences have been reported including addiction, opioid tolerance, hyperalgesia, hypogonadism, sexual dysfunction and recently immunosuppression.

“Thus, opioids—especially morphine—inhibit cell-mediated immunity, which is the principal defence against cancer.

“Weak clinical evidence indicates that opioids may play a role in the progression of existing tumours.

“However, these hypothetical findings are preliminary and need to be confirmed in later studies.”

The use of prescription opioids for the management of chronic pain has increased remarkably.

Addiction rates among patients who are given opioids for chronic pain have also increased, with 29 percent of such patients misusing opioids and 12 percent developing an opioid use disorder, according to a study published in the journal Pain.

A population-based cohort of 13 127 adults followed up to 11 years, aimed at investigating the risk of death among opioid users.

The risk of all-cause mortality was significantly higher among long-term opioid users, but long-term use of opioids did not seem to increase the risk of developing cancer.

A research team aimed to examine the possible association between the pattern of opioid use and the changes in the rates of pancreatic cancer from 1999 to 2016.

Using the Centers for Disease Control’s WONDER online data, the team extracted the opioid death rate and its link to prescription and illicit opioid use.

Incidence of pancreatic cancer was retrieved from the Centers for Disease Control and Prevention’s online database.

They extracted the pattern of the lifestyle and behavioural factors that over time could potentially affect the risk of pancreatic cancer.

The team then evaluated whether the trend in opioid usage could explain increasing pancreatic cancer diagnoses as potential confounding factors.

Researchers found that both pancreatic cancer and opioid death rates rose over time at the national and state levels.

A prior state’s opioid death rate significantly predicted the trend in the incidence of pancreatic cancer years after and had a significant effect on the estimated annual change in the rate of this cancer.

The collected data suggests a possible link between opioid consumption and the risk of pancreatic cancer.

Eytan Alexander, the managing director of the drug addiction firm Ukat said: “Finally, it is written in black and white the dangers and addictive nature that prescribing opioids and other ‘pain relief’ drugs can have on patients.

“Unfortunately, the general consensus for a long time has been that this isn’t a real addiction, but trust us, it is. Prescription drug addiction is as real as heroin addiction but, in this case, the addict gets their drugs from their GP rather than a dealer.

“We’re pleased to hear that today the advice is this should no longer be an option.”