Home » Health News » Cancer could be detected with a URINE test, scientists hope

Cancer could be detected with a URINE test, scientists hope 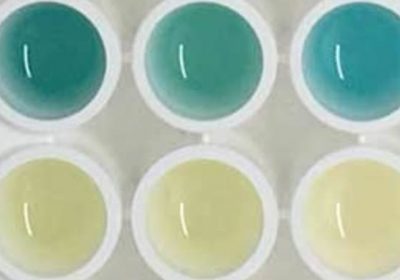 Urine test that changes colour if it detects cancer could help diagnose the killer disease in the future, scientists say

A urine test that changes colour if it detects cancer could help diagnose the killer disease in the future, scientists say.

Trials on mice showed it worked, with their urine turning a shade of bright blue if they had colon cancer.

Scientists hope the test will pave the way for a new diagnostic tool which would be cheaper and easier than current methods.

Finding cancer early can boost survival rates because treatment can be started as soon as possible. 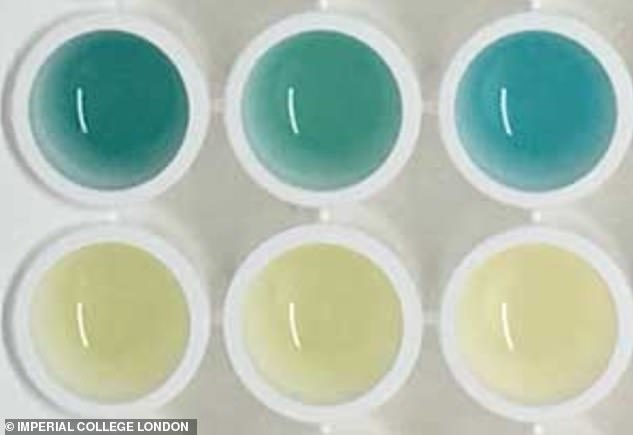 A urine test that changes colour if it detects cancer has been developed by scientists. It was tested on mice and accurately turned bright blue in mice with colon cancer (pictured)

‘This test can be administered without expensive and hard-to-use lab instruments,’ said study author Professor Molly Stevens, of Imperial.

‘The simple readout could potentially be captured by a smartphone picture and transmitted to remote caregivers to connect patients to treatment.

The test works by injecting the mice with tiny devices called nanosensors, which travel through the body.

If cancer is present, enzymes released by tumours called protaeses cut the nanosensors up into smaller pieces.

They pass through the kidney and turn the urine blue. If there is no cancer present, there will be no colour change.

This study used ultra-small gold nanoclusters (AuNCs) which entered the body attached to a protein.

The AuNCs are broken apart from the protein by an enzyme in the group MMP, which many cancer types, including colon tumours, produce high levels of.

Once broken, the AuNC pieces are so small they are able to travel through the blood and filtered by the urine.

In healthy mice without high MMP levels, the clusters remain intact, still connected to the protein, and are too large to pass into the urine.

AuNCs turn blue when treated with a chemical substrate and hydrogen peroxide.

So, when they pass through the urine, they will be visible to the naked eye after chemical treatment.

‘By taking advantage of this chemical reaction that produces a colour change, this test can be administered without the need for expensive and hard-to-use lab instruments.’

The test accurately detected which urine samples came from mice with colon tumours in a study of 28 mice – where 14 mice were healthy and 14 had colon tumours.

The bright blue colour was visible within half an hour of the urine being treated with a chemical.

The authors wrote: ‘We have developed a modular approach for the rapid detection of a disease state based on a simple and sensitive colorimetric urinary assay that requires minimal equipment and can be read by eye in less than one hour.

‘We envision that this modular approach will enable the rapid detection of a diverse range of diseases.’

The mice showed no side effects and the scientists said there was no evidence the nanosensors lingered in the body anymore.

The test is only in the early stages of development and researchers are working on making it even easier to use.

They envision it will be able to distinguish between different cancers, not just colon, and diseases.

Current diagnostic tools for cancer sometimes rely on biological signals known as biomarkers, which are produced when tumours grow and spread.

Other tests that diagnose cancer include MRI scans, blood tests and a lumbar puncture, depending on what cancer the doctor suspects.

But tests can be drawn out, with results taking days to come, and expensive.

BREAST CANCER COULD BE DIAGNOSED BY ARTIFICIAL INTELLIGENCE

A computer could be better than a doctor at diagnosing certain types of cancerous and precancerous breast lesions, researchers at the University of California, Los Angeles have shown.

The team trained an artificial intelligence system using 240 biopsy images, and tested it against 87 pathologists.

The machine performed more or less as well as doctors at detecting and classifying all of the breast biopsies, according to results published in the JAMA Network Open journal in August.

However, it was better at making one crucial distinction: telling the difference between DCIS (ductal carcinoma in situ), a type of cancer, and atypical hyperplasia, a high-risk lesion that has very similar hallmarks but does is not cancerous and does not require the same level of treatment.

Dr Marilin Rosa, a pathologist at Moffitt Cancer Center who was not involved in the study, told DailyMail.com the current methods for telling the difference between the two are imperfect.

‘Sometimes, doctors do not even agree with their previous diagnosis when they are shown the same case a year later.’