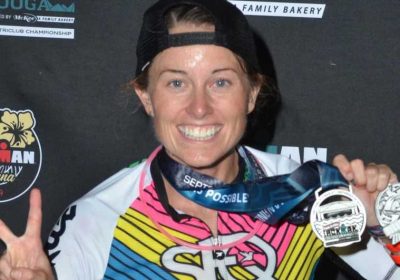 It wasn’t very hard to talk Jess Zaiss into doing two Ironman triathlons in one weekend. Back in April, when the 31-year-old was training for Ironman Texas in The Woodlands, Texas, her Los Angeles training partners signed up for back-to-back Ironmans in the fall to prepare for an Ultraman—a three-day event that features a 10K swim, 263-mile bike, and a double marathon (52.4-mile) run—taking place in Florida next February.

“At first, doing back-to-back Ironmans sounded crazy, but after I thought about it, it sounded fun,” Zaiss, an oceanography Ph.D. candidate at the University of Southern California, told Runner’s World. “An Ironman distance doesn’t scare me anymore. But this scared me.”

According to the Ironman event organizers, she is the first woman to ever complete back-to-back full-length Ironmans in two days.

For most of us, finishing just one Ironman—which features a 2.4-mile swim, 112-mile bike, and 26.2-mile run—would be an enormous feat. But for Zaiss, who has completed three Ironmans in the past and is training for the Ultraman next February, the hardest part wasn’t the racing itself, but figuring out how to get to both start lines on time.

Jess Zaiss (pictured here at the Ironman Maryland swim start) had to finish her first Ironman within 13 hours and 30 minutes in order to make it to Tennessee in time to race the next day.
Courtesy of Jess Zaiss

“Basically, we had to plan every last detail ahead of time so we could just roll up and race in Tennessee,” Zaiss said.

Those details included training, of course. To prepare for the double, she completed long brick workouts, such as a four-hour bike ride followed by a two-hour run.

On the Thursday before the race weekend, Zaiss and three of her male teammates who were also attempting the double flew into Chattanooga to check into the race and give their gear bags (including towels and race fuel) to two friends, who would set up their transition stations for them on Sunday. The triathletes then loaded their bikes, swim gear, and equipment for Maryland into two vans and drove 10.5 hours to Cambridge, where they checked into the race on Friday night.

“On Saturday, we were racing against the clock, because we had to start driving to Tennessee by 8:30 p.m. in order to make the 7:30 a.m. swim start the next morning,” Zaiss said. “I finished the race at 8 p.m., hopped right into the van, and we drove through the night.”

Zaiss said that the first race, which she finished in 13:05:00, was harder than she anticipated, since it was a humid, 85-degree day and the bike course was hilly. “Having Chattanooga hanging over me made it hard mentally, too,” she said.

In the van between races, Zaiss forced herself to eat pizza to replenish the 7,000-plus calories she lost in the race, but it made her feel nauseous. “Even now, I can’t eat pizza because of that night,” she said.

She popped a Benadryl and slept between three and four hours in the van, then woke up at 5:15 a.m. to eat a few more slices of pizza and drink a bottle of Nuun electrolyte mix before changing into her suit to race again. The van pulled up to the race start at 7:10 a.m., just 20 minutes before the gun fired.

“Once we got there, I was so relieved, because it was such a tight schedule,” Zaiss said. “I saw a friend on the starting line and I burst out crying. That’s when I realized how exhausted I was. I was scared of doing another 140.6 miles. That’s the only time a race has ever intimidated me.”

Though even the thought of finishing the 2.4-mile swim leg seemed overwhelming, Zaiss got through each section of the race by breaking it up into chunks. “I told myself I just had to swim to one buoy, then once I reached it, I’d swim to the next,” she said.

Moving at a slower pace than Saturday, Zaiss ticked off the bike portion of Chattanooga with help from a well-practiced nutrition routine—a bottle of Tailwind Endurance sports drink every two hours, a half package of Muir energy gel every half hour, and lots of water—then eased into the final marathon leg.

“I promised myself before I started that I could walk the first mile of the run,” Zaiss said. “I had packed a bag of Cheetos in my gear bag, so I walked and ate Cheetos for that first mile.”

By the end of the her second Ironman, Zaiss said her quads were so fatigued that it was too painful to run on downhills. She was able to power through with help from Cheetos, Chef Boyardee, and smart fueling on the bike.
Courtesy of Jess Zaiss

Zaiss said that while there was never a point where she wanted to quit—“I’m too stubborn for that,” she said—miles 16 to 20 were particularly dark. She was dealt a miserably hot day in Tennessee, with a heat index of above 100. To keep from passing out from exhaustion, she had to stay on top of hydrating, fueling, and cooling down with ice socks offered at aid stations. At mile 16, she was offered a cup of Chef Boyardee pasta.

“It was hands-down the best thing I’ve ever eaten,” she said. “I was craving something salty and liquidy, and it was perfect. I’m adding Chef Boyardee to my race pack from now on.”

She finished the last few miles walk-running, as her quads hurt too badly to run on the downhills. “I was relieved once I finished. All I was thinking was that I can finally stop, sit, and drink water,” said Zaiss, who crossed the line in 15:05:40.

The magnitude of her accomplishment didn’t really set in until the following week, when she was back in Los Angeles. Surprisingly, her muscles weren’t any more sore than they usually are after an Ironman, but she could tell how much of a calorie deficit her body was in by her constant junk food cravings.

“All I ate that week was Sonic, Wendy’s, and Taco Bell,” she said.

Zaiss is still recovering from the race—she said she has yet to run since finishing Chattanooga—but she’s excited for the Ultraman next year.

“I think it’ll be easier, because it’s spread out over three days and is only in one place,” she said.