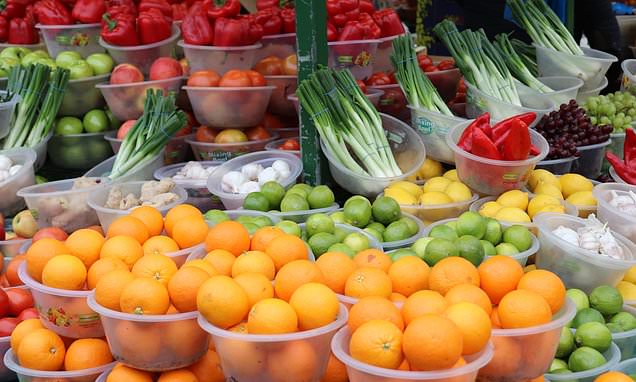 No-deal Brexit will lead to thousands of deaths from heart attacks and strokes by driving up the price of fruit and vegetables, study claims, but critics brand it ‘Project Fear at its very worst’

No-deal Brexit will lead to thousands of deaths by driving up the price of fruit and vegetables, experts have calculated.

Increased prices will mean British intake of fruit and vegetables could drop by as much as 11 per cent, according to researchers from Imperial College London and the University of Liverpool.

This would lead to more than 12,000 extra deaths caused by heart attacks and strokes between 2021 and 2030, they estimate.

Critics described the study as ‘Project Fear at its very worst’. 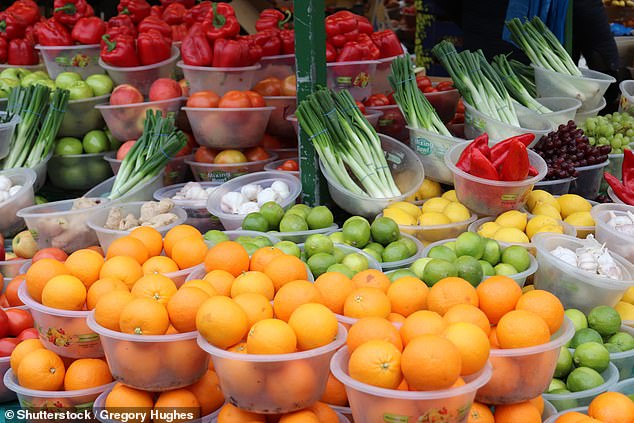 Any deal under which the UK exits the EU will push up prices, cutting the amount of fresh produce people buy, a report said

But the academics, writing in the BMJ Open medical journal, said the UK is vulnerable to price rises because so much fresh produce is imported.

Some 84 per cent of fruit and 48 per cent of the vegetables consumed in Britain is imported.

The extra tariffs and transaction costs that a no-deal Brexit would involve would see the cost of bananas go up 17 per cent, lemons and oranges by 14 per cent and tomatoes by 15 per cent, the researchers calculated.

Even at present, only 27 per cent of adults achieve daily recommended fruit and veg intakes.

But price rises would see this plummet, with intake dropping 11 per cent.

Because low fruit and vegetable intake is a major risk factor for cardiovascular disease, this would impact heart and stroke deaths, the researchers warned.

Professor Christopher Millett, from the School of Public Health at Imperial, who jointly led the research, said: ‘The UK’s exit from the European Union has long been framed in terms of its political and social importance.

‘But this study shows that the impact of Brexit will reach far beyond the economy and may affect people’s risk of disease.

‘The UK Government must consider the public health implications of Brexit trade policy options, including changes to the price of key food groups.’

But Edgar Miller, convenor of the Economists for Free Trade group, said: ‘This is Project Fear at its very worst – a report written by a group of generally junior medical researchers none of whom have any discernible expertise in trade theory or experience in modelling trade flows.

‘They have missed the key point: the EU exists to protect EU, the majority French, farmers from market forces in the rest of the world.

‘Getting rid of EU protectionism through free trade agreements and unilateral elimination of tariffs on fruit and vegetables that are not produced in the UK will result in an immediate fall in food prices, as exporters around the globe supply food at lower world prices.

‘Food producers from the EU will then have to cut prices to stay competitive; they will not be in a position to raise prices in Britain, even if Britain imposes tariffs against the EU.

‘In addition, the UK will see a seven per cent gain in GDP and an overall 8 per cent fall in consumer prices.’

What Brexit options could MPs vote on now May’s deal has failed?

More than half a dozen Cabinet ministers are pushing for Parliament to vote on ‘options’ for how to proceed if Theresa May’s deal fails.

Here are some of the possibilities that could be considered:

MPs from across parties have been mooting the idea of a Norway model.

It would effectively keep the UK in the single market, with a customs bolt-on to avoid a hard Irish border, and backers say it would keep Britain close to the EU while cutting contributions to Brussels.

However, critics say it has the drawbacks of keeping free movement, – and tightly limiting the possibilities for doing trade deals elsewhere.

The EU is also thought to have concerns about a country the UK’s size joining the EEA, while other states in the group might be resistant.

The so-called ‘People’s Vote’ campaign has been pushing hard for another national vote, with cross-party backing.

MPs would almost certainly want to be asked to back the idea in principle.

The Article 50 process would probably need to be extended to facilitate a referendum, but the EU seems open to that possibility.

However, the biggest problem is likely to be that even if the Commons can agree on holding a vote, they will be be completely split over the question.

Some want it to be a rerun of 2016 with Remain v Leave. Others say it should be May’s deal against no deal.

There are also those who support two rounds of voting, or multiple choice.

Brexiteers have been demanding the UK takes a different approach this time, seeking a looser Canada-style arrangement with the EU.

The arrangement they want would be a relatively clean break from the EU, with the ability to strike trade agreements elsewhere.

But it would fall far short of the low-friction access urged by Labour and large numbers of Tories.

Brexiteers have been floating a ‘managed’ no deal which could feature in the votes.

It would involve the UK offering the EU billions of pounds to secure a transition period, even if there is no wider deal.

However, there is little sign that the EU is ready to agree.