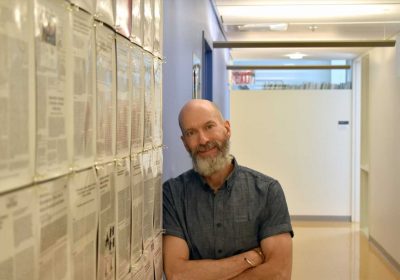 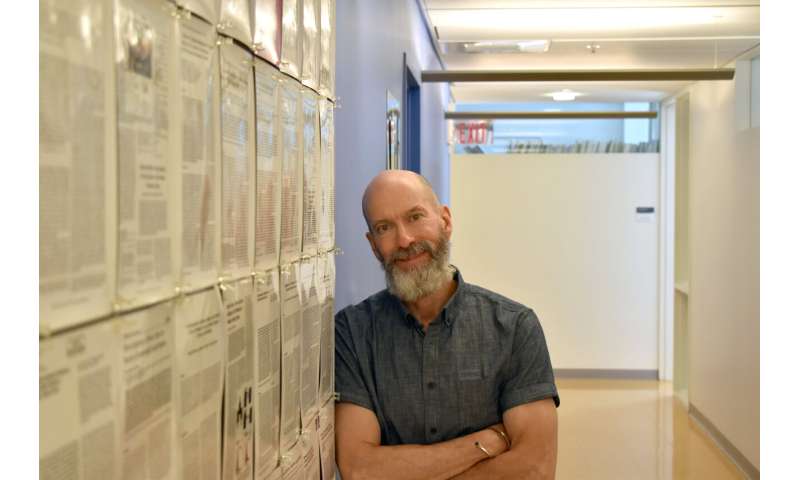 If you open your office door one morning and there is a new package waiting on your desk, that’s what you will notice most in the otherwise unchanged room. A new study by MIT and Boston University neuroscientists finds that the dynamic interplay of different brain wave frequencies, rather than dedicated circuitry, appears to govern the brain’s knack for highlighting what’s surprising and downplaying what’s predictable.

By measuring thousands of neurons along the surface, or cortex, of the brain in animals as they reacted to predictable and surprising images, the researchers observed that low frequency alpha and beta brain waves, or rhythms, originating in the brain’s frontal cognitive regions tamped down neural activity associated with predictable stimuli. That paved the way for neurons in sensory regions in the back of the brain to push forward information associated with unexpected stimuli via higher-frequency gamma waves. The backflow of alpha/beta carrying inhibitory predictions typically channeled through deeper layers of the cortex, while the forward flow of excitatory gamma carrying novel stimuli propagated across superficial layers.

“These interactions between beta and gamma are happening all over the cortex,” said Earl Miller, Picower Professor of Neuroscience in the Department of Brain and Cognitive Sciences at MIT and co-senior author of the study in Proceedings of the National Academy of Sciences. “And it’s not generic—it targets the processing of specific stimuli.”

In those regards, this new study extends much of Miller’s recent work. Previously his lab at The Picower Institute for Learning and Memory has shown that in the prefrontal cortex, working memory depends on bursts of beta rhythms from deep layers regulating gamma frequency activity in more superficial layers. Those findings built, in part, on research published in 2012 by postdoc André Bastos, who is lead author of the new paper. Now the new study and another published by Miller’s lab earlier this year suggest that this push and pull between the frequency bands is a common regulatory system of information flow in the cortex. Moreover, the new results show experimentally that it has a key role in predictive coding (as Bastos began to theorize in 2012), not just the related function of working memory.

Predictive coding is a key cognitive function that appears to become disrupted in autism spectrum disorders, noted Miller and Bastos. Some people with autism struggle to regard familiar stimuli as such, treating everything as new and equally salient. That can interfere with learning to recognize predictable situations and therefore the ability to make generalizations about experience.

“Because you are not able to tamp down and actively regulate predicted information, the brain is in a constant state of surging information forward which can be overwhelming,” Bastos said. In fact, for anyone, he added, being in a completely new place where predictions of the environment have not yet had time to form can produce a feeling of sensory overload.

In the study, the team gave animals a simplified predictive coding experience. They were presented with an image as a cue, and then after a brief pause three images returned to the screen including the original. The animals simply had to direct their gaze to the previously cued image to complete the task. Sometimes the cue would be the same for many trials on end (thereby becoming predictable and familiar). Sometimes the cue would suddenly change, violating the predicted expectation. As animals played the game, the scientists were reading out neural activity and overall rhythms produced by that activity in five areas across the cortex, from visual areas in the back of the head to a parietal cortex in the middle, to cognitive cortices, including the prefrontal cortex, in the front.

The team wasn’t looking to analyze working memory, or how the animals held the cue image in memory. Instead they were measuring differences made when the cue image was predictable vs. when it was not. Their measurements showed that unpredicted stimuli generated more neural activity than predictable ones. They also revealed that the activity associated with unpredicted stimuli was strongest in the gamma frequency band (and the very low frequency theta band), while activity associated with predicted stimuli was strongest in alpha/beta frequencies.

These changes in power in each frequency weren’t across the board—it was greatest specifically among neurons that responded most to the presented stimulus. That means that the regulatory changes of brain waves were acting most strongly on the neural circuitry processing the cue images the animals were seeing. For this reason, the team refers to their conceptual model of predictive coding as “predictive routing.”

“Our paper shows that predictive coding can work without specialized circuits for detecting mismatches between predictions and reality,” Miller said.

Bastos further explained, “The key element of this new model is that prediction can be accomplished by selectively inhibiting routes of information flow that carry predictable information.”

Co-senior author Nancy Kopell, William Fairfield Warren Distinguished Professor of Mathematics at Boston University, added, “To be able to support that idea required the elaborate experiments described in the paper, involving measurements from multiple parts of the brain.”

Subsequent analysis of the data also showed other key trends. Among them was that the coherence of activity between cortical regions was stronger in the alpha/beta band when the cue image was predictable and stronger in gamma when it was not. Moreover, the direction of these different bands (how they propagated back and forth across the cortex) showed that alpha/beta fed back from higher cognitive) regions to lower (sensory) regions, while gamma fed forward from lower regions to higher ones.

The scientists also saw that alpha/beta mostly peaked in deeper layers of the visual cortices, while gamma often was strongest in superficial layers. But there were exceptions along the way. The parietal cortex region 7A bucked the trend of peaking in gamma for unexpected stimuli, instead peaking in the higher end of the beta frequency band. One possibility, Kopell says, is that 7A was involved in a working memory buffer, which is believed to use beta oscillations. Another explanation could be that 7A’s beta activity is related not to prediction as much as attention. Animals performing the task did need to pay at least some degree of attention to the cue, whether it was predictable or not.

Designing experiments that can fully separate attention from prediction could be an important future direction, Bastos said. Another important future goal will be to create computational models that simulate the interactions between layers and frequencies to inhibit predicted information.