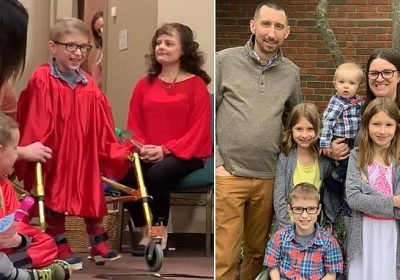 Heartwarming moment boy, 5, with spina bifida walks for the first time at his preschool graduation

A five-year-old boy with spina bifida surprised his classmates and teachers when he walked at his preschool graduation ceremony for the first time.

Blake Mompher, from Prospect, Ohio, has spent most of his life in a wheelchair, and doctors had told his parents in the past that they weren’t sure if he would ever walk.

But on Saturday, using a walker, he took a few steps across the stage at Crosswood Preschool in Marion as his parents filmed it.

‘Oh man, I can’t even describe the feeling,’ Megan told DailyMail.com. ‘It was one of those out of body experiences like: “Am I really watching this?” Of course, I cried.’ 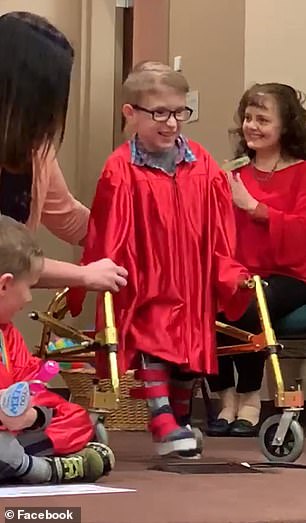 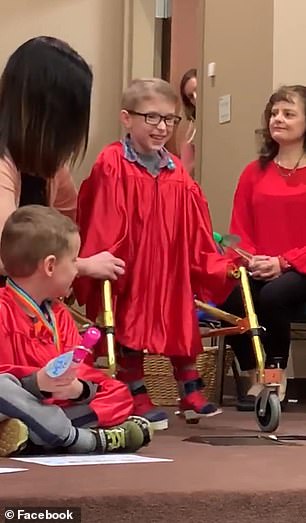 Blake Mompher, five, from Prospect, Ohio, was diagnosed with spina bifida before he was born. He walked across the stage at his preschool graduation ceremony for the first time (left and right) 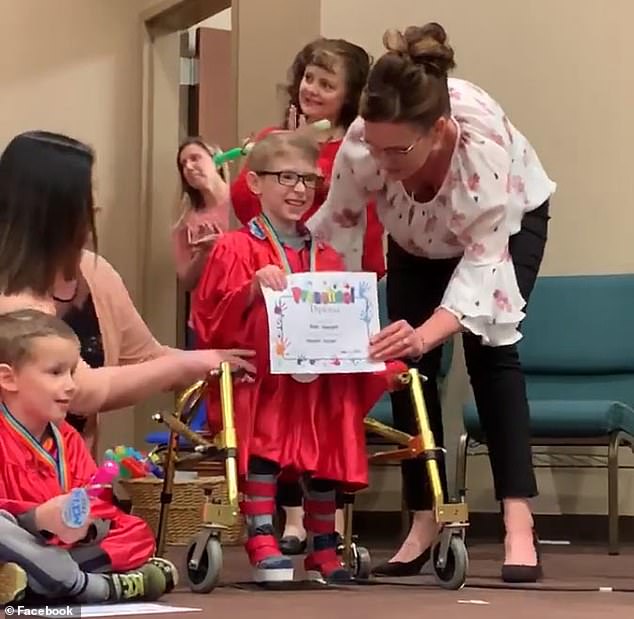 Blake was diagnosed with spina bifida when Megan was just 20 weeks pregnant, she told DailyMail.com

She and her mom went in for a routine ultrasound appointment because her husband, Aric, was working three hours away.

‘I knew how [ultrasounds] went from my previous two kids,’ Megan said.

‘The technician stopped the ultrasound immediately and said: “I’ll be right back”. I told my mom I knew something was wrong.’

Megan’s doctor told her that Blake had hydrocephalus, a condition in which excess cerebrospinal fluid builds up in the brain, and spina bifida.

Spina bifida is a defect of the neural tube, a structure from which the brain and spinal cord form.

It normally closes early in pregnancy. But, in those with spina bifida, the neural tube fails to develop or properly close,

This leaves the spine and the nerves susceptible to trauma and damage.

The condition’s symptoms can range from mild to severe, and leave sufferers with physical and intellectual disabilities.

Children often suffer from walking and mobility problems due to weak muscles or nerves in the legs not working properly.

They can also experience bowel and bladder problems, difficulty breathing and swallowing, and a have higher risk of wounds.

Currently, there is no cure for spina bifida. Treatment consists of managing symptoms and preventing complications. 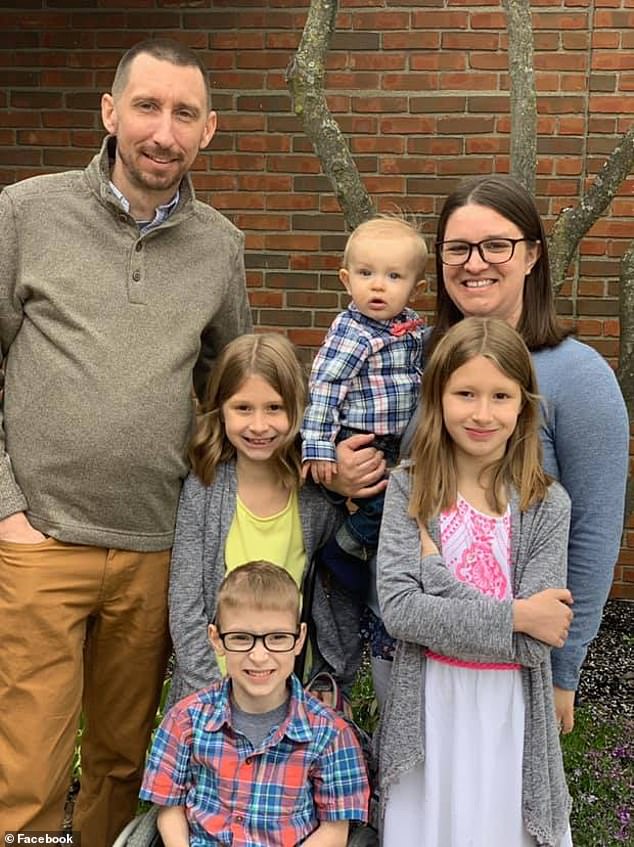 When Blake’s mother, Megan, was 20 weeks pregnant, he was diagnosed with spina bifida and hydrocephalus, a condition in which excess cerebrospinal fluid builds up in the brain. Pictured: Blake (center, seated) with his parents and his siblings 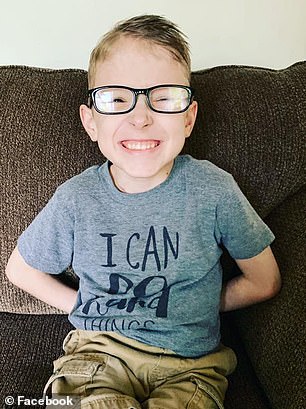 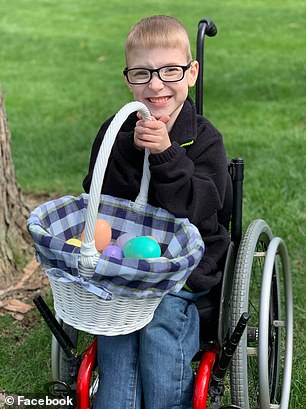 Blake (left and right) had at least five surgeries by age one and is in speech therapy, occupational therapy and physical therapy. Megan had set a goal for him to walk by the end of the school year.

More than 1,600 babies are born with spina bifida each year in the US, according to the Centers for Disease Control and Prevention.

Blake was induced at 37 weeks’ gestation at the local hospital because his head was getting too large and, a couple of hours later, he was transferred to Nationwide Children’s Hospital in Columbus for surgery.

Within the first year of his life, Blake had at least five surgeries after a shunt procedure, a hole or small passage to help drain cerebrospinal fluid and redirect it, was performed at just a few days old.

Blake is currently in speech therapy, occupational therapy and physical therapy, the latter where Megan had set a goal for him to walk by the end of the school year.

But in November and December, he suffered two separate shunt infections that left him hospitalized for a few weeks.

‘He had lost so much weight and missed a lot of preschool, I couldn’t imagine getting him up to walk at this point,’ Megan said.

On top of all of this, Blake had a feeding tube inserted in his stomach, which slightly interfered with the braces he used for walking. 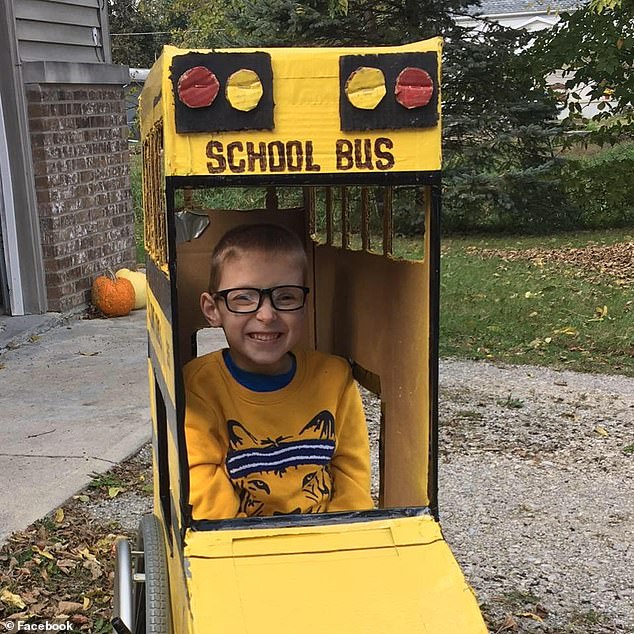 He was temporarily set back due to two infections in November and December as well as having a feeding tube inserted. Pictured: Blake in his Halloween costume as a school bus 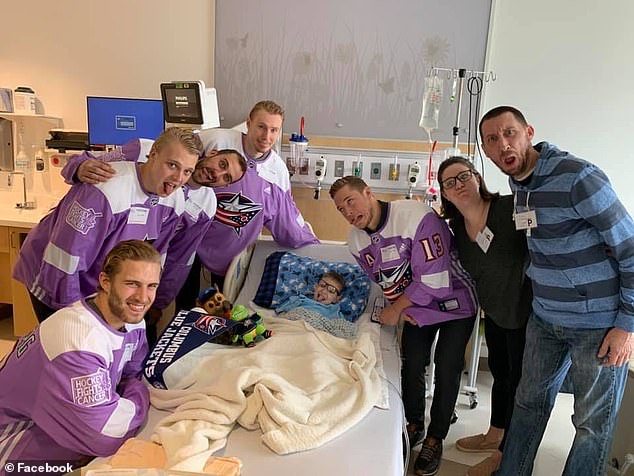 Megan says she hopes Blake’s story will give hope to families with similar diagnoses that their children may walk one day. Pictured: Blake (center) with his parents and members of the Columbus Blue Jackets NHL team

‘Three weeks before graduation, [the therapist] said: “Let’s bring him in. Let’s see what he can do”,’ Megan said.

‘He walking just like before. The braces didn’t bother the tube.’

On the day of graduation, just a few select people knew he would walk, but none of Blake’s classmates or parents knew.

‘Everyone stood up and applauded him and I just couldn’t believe it,’ Megan said.

‘Your mind flashes back to everything he went through and I’m just so proud of him.’

She and her husband hope that, by sharing Blake’s story, it will give hope to families who are suffering through similar medical issues.

‘We hope we can encourage other parents who fear their child might not with the same diagnosis or a similar one that there’s always hope,’ Megan said.

‘I’ve had people message me that say: “Oh this video gives me hope that my child might walk one day.” That’s everything to me. It make it worth it.’