Home » Health News » Beyoncé’s father Mathew Knowles has breast cancer: What you need to know about the disease in men

Beyoncé’s father Mathew Knowles has breast cancer: What you need to know about the disease in men 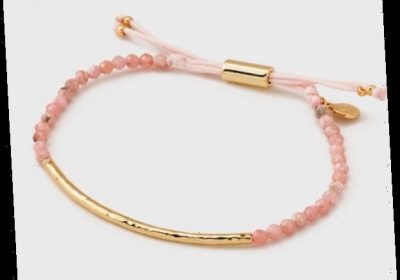 Mathew Knowles, father of Beyoncé, recently announced that he’s being treated for breast cancer — coming as a surprise to many who still don’t understand that, while it’s relatively rare, men, just like women, can be diagnosed with the disease.

“I need men to speak out if they’ve had breast cancer,” he told “Good Morning America” on Wednesday. “I need them to let people know they have the disease, so we can get correct numbers and better research… Men want to keep it hidden, because we feel embarrassed — and there’s no reason for that.”

Gorjana will be donating 50 percent of proceeds from the Power Gemstone Bracelet to the Breast Cancer Research Foundation.

In addition to donating $50,000 to BCRF, Rothy’s is spreading the love this October by gifting a select limited edition pink shoes to survivors and supporters with the purchase of eligible shoes.

"At Rothy’s, we’re just as dedicated to sustainability as we are to supporting women. We’re thrilled to be an official partner with the Breast Cancer Research Foundation, which works tirelessly to support lifesaving research. Last year we asked our customers to tell us about women in their life who have been impacted by breast cancer, and we were incredibly moved by the responses we received. We’re looking forward to reading more of those special words this year." – Rothy’s VP of Marketing, Elie Donahue

As a direct contribution in support of this Print with Purpose collection, the BCRF will receive a $22,000 donation from Lilly Pulitzer.

Jack Rogers will be donating 10% of proceeds from the Georgica sandal in blush and magenta to the Breast Cancer Association throughout October.

100 percent of the proceeds will go to the Breast Cancer Research Foundation.

50 percent of the proceeds from every purchase of the Metastatic Breast Cancer Charm Necklace Set will support our Legacy Retreat through Inheritance of Hope for families with a parent battling metastatic breast cancer.

20 percent of all net proceeds will be donated to Bright Pink.

Bobbi Brown Cosmetics will donate $24.00 from the purchase of each Proud to Be Pink Lip Color Duo to the Breast Cancer Research Foundation® (BCRF) from 9/9/19 to 6/30/20.

In support of The Estee Lauder Companies’ Breast Cancer Campaign, Origins will donate 100 percent of the purchase price of this Limited Edition Blooming Bold Lipstick Set.

Donna Karan Cosmetics will donate 20 percent of the SRP from the sale of this product to the Breast Cancer Research Foundation.

David Yurman is partnering with BCRF this October, launching an exclusive bracelet with 20% of proceeds going towards the non-profit.

With each purchase of this product, Estée Lauder will donate 20 percent of the suggested retail price to the Breast Cancer Research Foundation.

10 percent of net sales will be donated to Boarding for Breast Cancer, a nonprofit that advocates for early detection and empowers young people to live a healthier lifestyle.

La Mer will donate 30 percent from the purchase price of this limited edition, travel-size Cleansing Micellar Water with a maximum donation of $53,000 to the Breast Cancer Research Foundation.

100% of US sales benefit Bright Pink®, a non-profit dedicated to prevention and early detection of breast and ovarian cancers in young women.

From September 9th – October 31st 20% of the proceeds directly benefit the Dr. Susan Love Foundation and their research.

In honor of Breast Cancer Awareness Month, Brahmin brought back a favorite pink collection with a portion of proceeds benefitting the National Breast Cancer Foundation during the month of October.

Activewear brand 686 is on a mission to board for breast cancer (literally!) with their Moonlight Jacket and will donate $18 from every jacket sold to BOARDING FOR BREAST CANCER (B4BC) a nonprofit foundation providing breast cancer education, prevention, and survivor support programs for young people.

On October 5th & October 6th, Native will donate $1 per bar of deodorant sold to Fuck Cancer’s Personal Ink (P.ink) a program, dedicated to empowering women to reclaim their bodies after mastectomies.

10 percent of each purchase goes to lifesaving research at the Breast Cancer Research Foundation!

During the month of October, customers can select any large round or large square pink suede box and pair with any pink flower and the brand will donate 20% of proceeds from to City of Hope, a world leader in the research and treatment of cancer.

"We are donating 100 percent of US proceeds from this Regenerist Whip Pink Ribbon Face Moisturizer + Refill to benefit Bright Pink and their life-saving mission focused on the prevention and early detection of breast and ovarian cancer."

20% of net proceeds from this purchase will help fight Breast Cancer.

Knowles reports that he had a unilateral mastectomy — the surgical removal of all breast tissue — in July, and plans to have his second breast removed in January. That, he says, should reduce the risk of recurrence — meaning a metastasis, which is the spreading of breast cancer cells to another part of the body, for which there is no cure — from 5 percent to 2 percent.

Breast Cancer Awareness Month is October, making it the ideal time to learn more about the disease, which, while rare, will affect about 1 in 833 men and 1 in 8 women over a lifetime. In 2019, there will be about 2,670 new cases diagnosed in U.S. males, according to the American Cancer Society (compared with the estimated 268,600 cases in women).

Here’s what else you need to know about male breast cancer.

“We are mammals also,” Harold Burstein, MD, a breast oncologist with the Dana-Farber Cancer Institute in Boston, tells Yahoo Lifestyle. “But while men do have breasts, we obviously don’t undergo the secondary developmental changes that come for women with puberty and then pregnancy,” which could contribute to the confusion around men having breast tissue, he says. “But mostly why you don’t hear about men having breast cancer so much is because the incidence is very rare, with roughly one male case for ever 100 women’s cases.”

“Fundamentally, the breast cancers are more or less the same,” Burstein says. Up to 90 percent of cases in men have the hormone-receptor status known as estrogen-receptor positive and HER2 negative, he says. The male symptoms — a painless lump or thickening of breast tissue; changes to skin in the breast area (such as dimpling or scaling), changes in nipple appearance; or nipple discharge (as with Knowles) — are the same as in women. The treatment approach, such as surgery, radiation, chemotherapy or hormone therapy, are also the same. “Ounce for ounce,” Burstein says, “men have outcomes very similar to that of women — although since we don’t do mammograms on men, sometimes it’s found later.”

That’s why it’s important for men to have a “general awareness of their bodies,” and, if they notice changes or “something that doesn’t seem right,” Burstein says, they should head to their doctor and have it checked out.

“Our slogan is, ‘Don’t be afraid to touch yourself’ for a reason,” explains Bret Miller, founder of the Male Breast Cancer Coalition.

NEW YORK, NY – SEPTEMBER 25:Hoda Kotb is seen on the set of the Today Show on September 25, 2018 in New York City.(Photo by Raymond Hall/GC Images)

You don’t hear about male breast cancer too much because it comes with a powerful, silencing stigma.

“‘It’s a women’s disease,’ ‘it’s emasculating,’ ‘men can’t get it because we don’t have boobs,’” are all reasons that some men associate male breast cancer with shame, according to Miller, a breast cancer survivor. He founded the coalition as a supportive resource six years ago, and says, “There still are people that do not know that men can get breast cancer. It’s crazy.” That’s why it’s important for people like Knowles to speak out about being diagnosed, adds Miller — to “help build awareness for early detection,” to help create “strength in numbers” and, ultimately, to fuel the push for more research that’s specific to breast cancer affecting men.

There’s historically been a lack of research into male breast cancer, but that may be about to change.

Such research is now being officially pushed by the Food and Drug Administration (FDA), according to an August draft guidance encouraging the inclusion of male patients in breast cancer clinical trials. “Less than one percent of all breast cancer cases occur in men, but men are more likely to be diagnosed at an older age and have a more advanced stage of disease. As breast cancer in men is rare, they have typically not been included in clinical trials for breast cancer treatment. This has led to a lack of data, so their treatment is generally based upon studies and data collected in women,” noted Richard Pazdur, MD, director of the FDA’s Oncology Center of Excellence and acting director of the Office of Hematology and Oncology Products in the FDA’s Center for Drug Evaluation and Research. “While some FDA-approved treatments are gender-neutral in their indication, many therapies are only approved for women and further data may be necessary to support labeling indications for men.”

It’s just as important for men as it is for women to get tested for BRCA gene mutations.

“One of the rare known causes of breast cancer in men is a hereditary predisposition, accounting for a somewhat larger percentage of male breast cancer than female breast cancer,” Burstein says. (Other risk factors include aging, family history, having the congenital Klinefelter syndrome, and radiation exposure.) And Knowles has shared that his BRCA test — a blood test using DNA to identify mutations in breast cancer susceptibility genes (BRCA1 and BRCA1) — showed he has a mutation on his BRCA2. As a result, he said he has “four things to be concerned about: prostate cancer, pancreatic cancer, melanoma and breast cancer. The rest of my life I have to be very aware and conscious and do all of the early detection: constant mammograms, constant prostate exams, MRIs.”

Burstein stresses that “all men diagnosed with breast cancer should be tested” for gene mutations, which “mostly relates to opportunities for prevention” — such as indicating a double mastectomy, instead of single, with the second being preventative. Also, since having the mutation raises the risk for the other cancers Knowles mentioned, knowing you have it would theoretically push men to get regular screenings.

Those with a BRCA2 mutation, in particular, will have about a 6 in 100 lifetime risk of developing breast cancer, Leigha Senter-Jamieson, a licensed genetic counselor at the Ohio State University Comprehensive Cancer Center, tells Yahoo Lifestyle. “So most won’t get it,” she says, “but that risk is still much, much higher than the usual risk for men,” which is about 1 in 100.

“Sometimes men aren’t asked about their family history of breast cancer or ovarian cancer at their checkup,” Senter-Jamieson notes — even though the answers could indicate whether or not they should be tested for BRCA gene mutations. Something else men are not often aware of when it comes to these mutations, she says, is that it “impacts their kids the same way it would with a woman” — yet another reason to get tested.

“When high-profile people share their stories, it does a good thing,” she adds, “both for the people getting tested and for people, like myself, asking the questions of patients.”