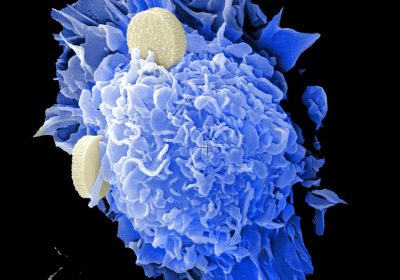 New research from CU Cancer Center member Scott Cramer, Ph.D., and his colleagues could help in the treatment of men with certain aggressive types of prostate cancer.

Published this week in the journal Molecular Cancer Research, Cramer’s study specifically looks at how the loss of two specific prostate tumor-suppressing genes—MAP3K7 and CHD1 —increases androgen receptor signaling and makes the patient more resistant to the anti-androgen therapy that is typically administered to reduce testosterone levels in prostate cancer patients.

“Doctors don’t normally stratify patients based on this subtype and say, ‘We’re going to have to treat these people differently,’ but we think this should be considered before treating them with anti-androgen therapy because they appear to be already inherently resistant to the therapy,” says Cramer, professor in the Department of Pharmacology. “They’re less likely to respond to the treatment.”

Cramer was the corresponding author on the paper. Lauren Jillson, a graduate student in the Cancer Biology Graduate Program at CU Anschutz, was the lead author on the study. Other CU Cancer Center members included M. Scott Lucia, MD, and James Costello, Ph.D. The 11 other authors were a mix of CU School of Medicine Department of Pharmacology and Department of Pathology researchers, as well as Stanford University and University of California researchers.

Elsewhere in the paper, Cramer and his co-researchers show that the loss of the expression of the MAP3K7 gene, in particular, is associated with poor outcomes, making it even more vital to treat patients who show the loss of the gene. Cramer notes that the majority of men diagnosed with prostate cancer have slow-growing tumors that are at low risk for metastasis, but about 20% of patients will eventually develop aggressive metastatic disease. Knowing that the lack of MAP3K7 and CHD1 is a signal of a more aggressive disease, and that treatments such as surgery, radiation, chemotherapy, and hormonal therapy all have side effects that can be significant, Cramer hopes eventually doctors can use the deletion as a marker for men who would benefit most from aggressive treatment strategies and spare those who are less likely to succumb to their disease.

“Those patients should be treated more aggressively than other patients because they’re more likely to die from the disease,” he says. “And we know that 50% of patients with loss of MAP3K7 and CHD1 are likely to recur after their primary treatment with recurrent disease.”

An earlier study by Cramer showed that of prostate cancer patients with combination MAP3K7 and CHD1 deletions, about half will have recurrent prostate cancer, which ultimately leads to death. About 10-15% of all prostate cancers harbor combined MAP3K7-CHD1 deletions. He and his team are now investigating alternative treatment methods for patients resistant to anti-androgen therapy due to the deletions.