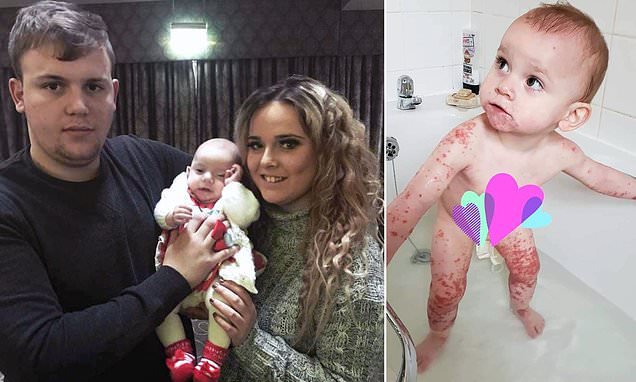 Almost killed by a kiss: Baby spends four days in hospital fighting for her life with HERPES after being pecked on the lips by a family member

A baby spent four days fighting for her life in hospital with herpes after a family member with a cold sore kissed her.

Kaylah Merritt, one years old, was covered in a painful purple rash all over her body before being diagnosed with eczema herpeticum, caused by the herpes simplex virus.

Her terrified parents, Brogan Thomas and Connor Merritt, from Darlington, County Durham, rushed Kaylah, who was crying in pain, to A&E.

Kaylah needed two rounds of antibiotics and several different creams to soothe her skin, but it could have progressed to ‘fatal’, doctors said.

After the person’s cold sore almost cost the life of Kaylah, who is still recovering now, her parents, both 22, are issuing a warning to others. 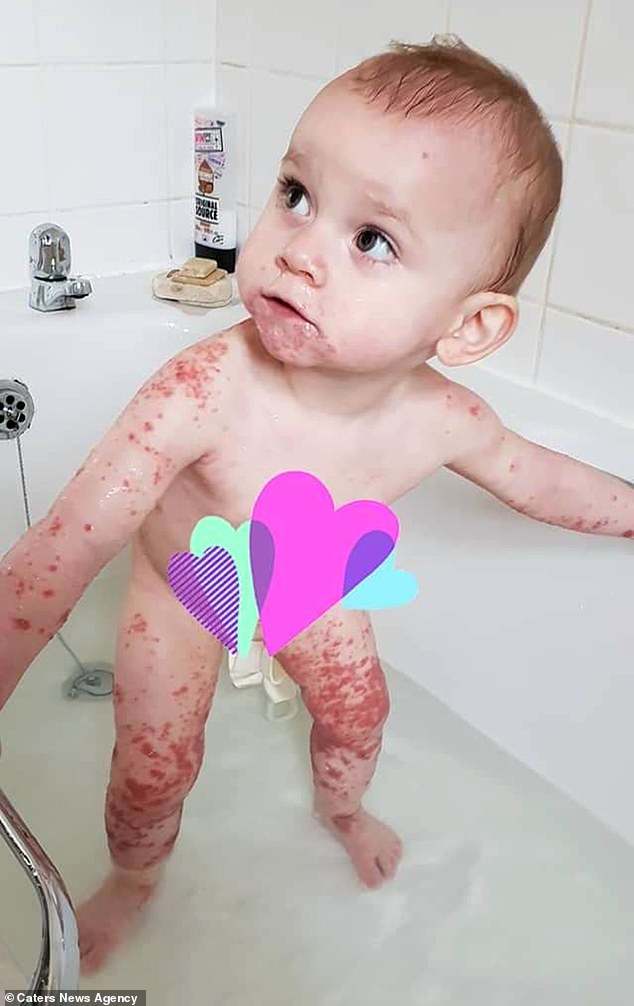 Kaylah Merritt, one years old, was covered in a painful rash all over her body before being diagnosed with eczema herpeticum 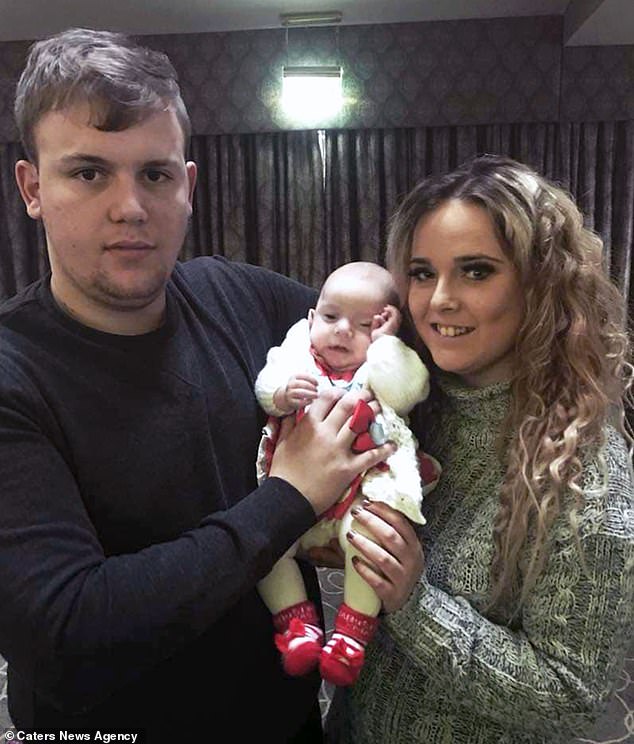 Parents, Brogan Thomas and Connor Merritt, from Darlington, County Durham, rushed their baby to A&E after seeing the rash develop when a family member with a cold sore kissed her

Stay-at-home mother Miss Thomas said: ‘When the doctors told me how dangerous it was I cried and cried thinking how I could have lost her due to a silly kiss.

‘Connor was shocked and couldn’t believe all this was down to a kiss too.

‘If we hadn’t gone to the hospital quickly, it could have been very dangerous, we could have lost her.’

When Kaylah developed the rash, Miss Thomas and her fiancée recognised that their baby’s cries were different.

They were also concerned because Kaylah previously had contracted meningitis and needed a lumbar puncture to survive.

Miss Thomas said: ‘Kaylah was crying so hard, I knew it could only mean she was in pain.

‘We were at home and I was about to put her in the bath when I suddenly saw all the marks on her legs.

‘It was an awful nightmare, there were purple rashes everywhere and Kaylah was sobbing her heart out.

‘I was terrified, my first thought was it had something to do with meningitis because she had it before.

‘My fiancée was petrified, but he kept me calm and made sure Kaylah was calm too.

‘I instantly knew we had to take her to the hospital.

‘The doctors told us that someone with a cold sore must have kissed her on the lips and because babies’ immune systems are not strong enough, she developed the rash.’ 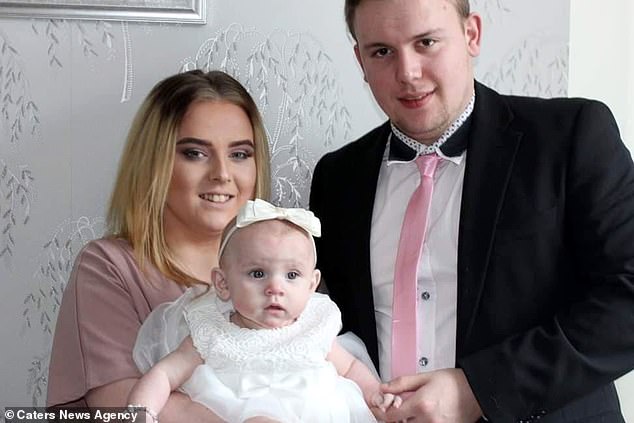 Miss Thomas and Mr Merritt, both 22 years old and engaged, are issuing a warning to others after a cold sore almost cost Kaylah’s life 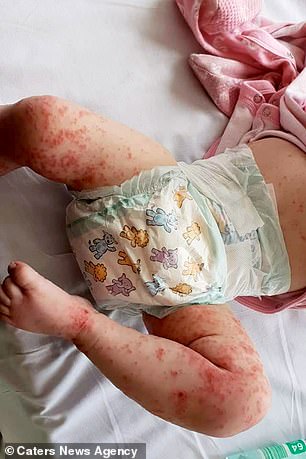 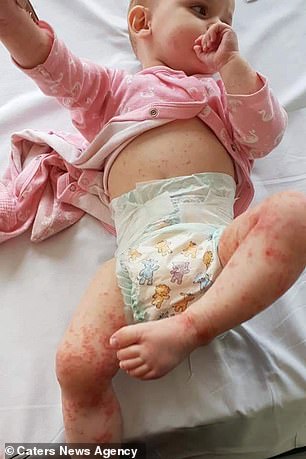 Symptoms of eczema herpeticum include painful, itchy skin eruptions, as well as high temperatures and shivering 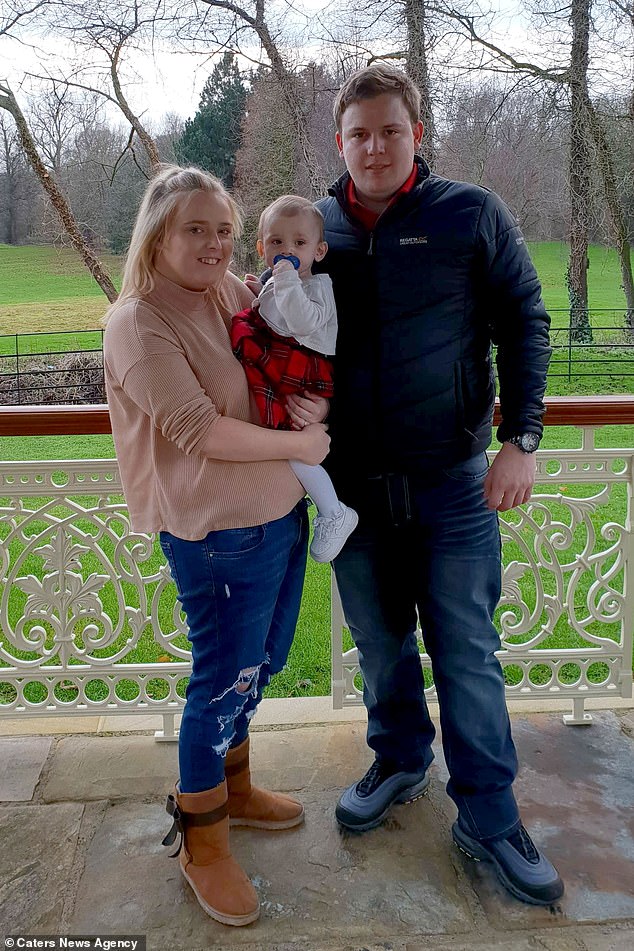 Miss Thomas and Mr Merritt said Kaylah still hasn’t recovered, but are glad to have her at home

WHAT IS ECZEMA HERPETICUM?

Eczema Herpeticum is a potentially dangerous viral infection that can spread to large areas of the skin.

It most commonly affects those with eczema.

Eczema Herpeticum is usually caused by the herpes virus that causes cold sores but also be brought on by hand, foot and mouth disease.

It develops when the virus infects large areas of skin rather than being confined to a small area.

Symptoms include painful, itchy skin eruptions, as well as high temperatures and shivering.

Blisters can spread, contain pus and weep, as well as sometimes leaving scars.

In severe cases, IV delivery may be needed.

Symptoms of eczema herpeticum, which is transferred by cold sores or foot and mouth disease, include painful, itchy skin eruptions, as well as high temperatures and shivering.

At Darlington Memorial Hospital A&E, doctors said Kaylah was lucky to have been brought in when she was.

Kaylah was able to go back home after four days in hospital.

But her parents said she still hasn’t fully recovered.

A month later, she still needs to take daily medication until the virus is gone and must attend doctor’s appointments on a weekly basis.

Miss Thomas said: ‘I was so relieved when Kaylah was out of danger.

‘I am over the moon Kaylah’s home now and enjoying herself with her toys and extra cuddles.

‘I just want other parents to know, you don’t have to be a physically ill to harm a baby – you can just be a carrier of the virus and still affect them.’

According to The Herpes Viruses Association, many people will be unaware that they carry the herpes simplex virus, with only one in three exhibiting symptoms that lead to a diagnosis.

In babies, the virus can be passed on either by a kiss, or in newborns, by the mother if she has had genital herpes for the first time within the last six weeks of pregnancy.

The risk is significantly reduced if she has had it prior to pregnancy, as she will have passed on the antibodies needed to fight it.

It’s not the first time parents, many of whom have lost their babies, have issued the warning of allowing strangers to kiss youngsters.

‘You might be one of the people who has cold sores that are so mild you haven’t noticed them – yet your mild infection could be transferred to a new baby.

‘Catching cold sores before the baby is six to nine months old can be serious, as their immune systems aren’t well developed.

‘Mothers with cold sores should not worry about kissing their own babies, because during the last months of pregnancy, a mother who has had cold sores passes protective antibodies for this virus to her baby through the placenta.

‘And if mum has not had cold sores herself, then a dad with a cold sore should not kiss his baby.

‘Also, dads need to be careful not to pass on cold sore virus to mums in the last stages of pregnancy because by then it may be too late for her to develop the antibodies her baby needs. Then the new baby will have no protection when it is born.’