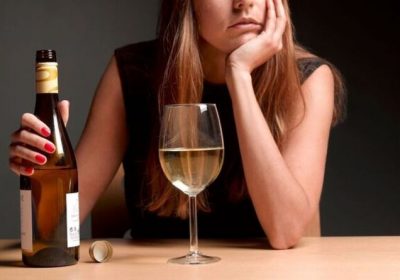 Lee Ryan opens up about alcoholism on Loose Women in 2019

The average British adult drinks 9.7 litres of pure alcohol per year – that’s about 18 units of alcohol a week. The NHS recommends drinking no more than 14 units a week, spread across three days or more… so it’s clear that a lot of us are drinking an unsafe amount. Express.co.uk reveals the 13 signs that you’re not just a casual drinker and you’re addicted to alcohol, according to the experts at Delamere.

At its simplest, alcohol addiction can occur when a person is unable to control or moderate the amount that they are drinking.

This can sometimes happen over a slow period of time that starts with social drinking and moves through to heavy drinking and then dependency.

A huge 68 percent of people starting alcohol treatment this year were self-referred, so it’s crucial to know the signs and symptoms of alcohol addiction to get help as soon as you need it.

Having a few drinks with your friends every now and then won’t do you too much harm, but it’s worth noting that drinking alcohol on a regular basis is a causal factor in more than 60 medical conditions.

The experts at Delamere said: “Alcohol addiction is at the chronic end of the spectrum of alcohol use disorders for which there is no cure.

“It can, however, be successfully treated and the sooner treatment is undertaken the better for the individual concerned and their loved ones.”

Alcohol misuse is defined as drinking in a way that is harmful or being dependent on alcohol, and the NHS advised everyone to drink no more than 14 units a week to prevent this from happening.

It’s easy to turn a blind eye to how much you’re drinking, but counting your units could really save you from becoming addicted to alcohol or harming your health.

A unit of alcohol is 8g or 10ml of pure alcohol, which equates to about half a pint of lower or normal-strength lager, beer or cider, a single small shot measure of spirits, or a small glass of wine.

If you’re already drinking more than that and feel as if you can’t stop – you might be addicted.

If you are unsure whether you or a loved one’s drinking habits count as alcohol dependency or addiction, look out for these signs:

Alcohol misuse has both short-term and long-term health risks.

For example, when drinking you increase your risk of accidents and injuries requiring hospital treatment, violent behaviour, unprotected sex that could lead to unplanned pregnancy or STIs, and alcohol poisoning.

In the long term, you are increasing your risk of early death and life-threatening diseases.