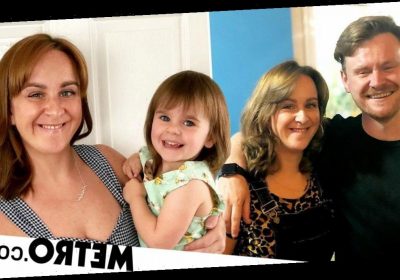 A mum suffering from endometriosis is preparing to be put into forced menopause at the age of just 30.

Joanne Kerr is also facing the possibility of having her womb removed, after suffering complications from the common condition, if HRT fails.

She was preparing to start her university nursing degree when she was diagnosed with endometriosis, which she describes as ‘one of the loneliest diseases.’

The 30-year-old, who lives with her husband Jack, a 31-year-old electrician, and their three-year-old daughter Penelope, has undergone surgery four times and suffers from sickness, blood clots, fainting and loss of feeling in her legs which can last for up to 48 hours.

The NHS nurse, from Kingsnorth in Kent, suffered a miscarriage last year while trying to have a second child and was told her condition is now spreading.

Doctors advised she will have to be put into early menopause to relieve her pain and potentially have a hysterectomy if she does not respond to hormone replacement therapy (HRT) treatment.

Joanne said: ‘I am still young, I am trying to raise a three-year-old with my husband and still want to do everything as normal with my peers and friends.

‘But I’ll be battling all that with raging hormones, hot flushes and mood swings – basically everything a 55-year-old woman goes through but at the age of 30.

‘I am not really worried about the periods stopping as that will be quite nice for a person who has been suffering from this pain.

‘As a woman we know we are going to face this at some point but after a career, after raising a family and after doing everything we want to do in life.

One in ten UK women are affected by endometriosis which causes tissue in the lining of the womb to grow in other places such as the ovaries and fallopian tubes.

Possible symptoms include lower back and stomach pain, pain during or after sex, heavy period pain and difficulty getting pregnant.

Painkillers, hormone medicines and surgery to remove patches of endometriosis can help women manage the pain and their condition.

Joanne said: ‘When I have a period each month, it is extremely extremely heavy to the end and for the first day or two, I am changing a sanitary towel every 20 minutes.

‘It is hard, especially with a young child – trying to balance that is quite difficult.

‘I also get what we call an ‘endo belly’ where your tummy swells and you look like you are six months pregnant before, during and after your period.

‘But some girls cannot even walk so I do feel lucky I still have my mobility.’

Joanne started her period when she was 11, but she wasn’t diagnosed with the condition until she was 20, after her first of four laparoscopy procedures – which she says were very scary.

She explained: ‘The laparoscopy was quite scary at first. I was only 20 and in my first year of university and I didn’t know what they were going to find.

‘That was after about five or six years back and forth to my GP.

‘I started my periods when I was 11 and they were always heavier than usual and made me feel quite sick.

‘When I got into my teenage years, my GP palmed it off as a ‘heavy period’ and said ‘unfortunately that is part of being a woman.

‘They never mentioned I could have this condition until they decided to refer me to a gynaecologist at 19.’

Joanne described her condition as ‘one of the loneliest diseases’ and said she is determined to help others speak about it and about their periods in a bid to raise awareness.

She said: ‘It can be one of the loneliest diseases because it is not spoken about as it is quite personal.

‘If you break your leg, people ring up to ask how you are and you can talk about it.

‘But with endometriosis, if somebody rings and asks how you are, you don’t want to say ‘my vagina is really bad at the moment.’

‘We talk about periods but not in a way we should and it is only just becoming more acceptable.

‘It takes a while to explain what endometriosis is but I am on a mission to make it more normal to talk about.’

Joanne, who has stage four endometriosis, will start on a monthly Zoladex injection which will put her into early menopause.

Estrogen fuels the growth of endometriosis lesions so dwindling estrogen levels at menopause should lessen her symptoms.

She added: ‘It’s not normal to have to take time off of work, school or university because of a period.

‘A period does hurt, but usually paracetamol and Ibuprofen can normally ease the pain.

‘When you feel it isn’t normal that’s when you should see your GP.

‘People say its hereditary but no one in my family has had it. It could be lying dormant and could spread at any time.’

Joanne has now set up a Facebook support group for endometriosis sufferers in Kent and has had more than 170 people join since it launched last month.

She said: ‘I set it up to help support as many women as possible.

‘I was searching to see if I could find any local groups on Facebook but there wasn’t, so I thought I would give it a go and set up my own. It has done really well so far.’