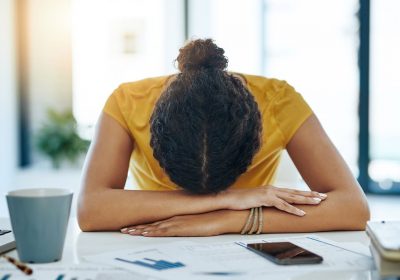 Seasonal allergy symptoms aren’t only about sneezing and wheezing. Sometimes the symptoms are more subtle. And that’s trouble, because when they’re less obvious, you either suck it up and keep feeling like crap or knock on the wrong doctor’s door for treatment, delaying relief.

There are tons of allergy treatments and symptom soothers, from nasal sprays to OTC meds, to prescription drugs to drops you can put under your tongue and nobody’s favourite, allergy shots. So if you have a little (or a lot of) congestion or itchy or watery eyes and any of the following, you don’t have to put up with it—but you might need a consult with an allergist to find the perfect way to make it all stop.

Feeling tired all the time

It’s not just all the congestion that makes you feel out of it. Seasonal allergies themselves can drag your energy down, says Eugene Hurwitz, M.D., medical director of the Center for Allergy and Asthma of Georgia. When your body encounters an allergen, it releases histamine, and “histamine in your body can make you feel fatigued,” he says. In addition, the inflammation that happens in your sinuses when you are allergic to something can cause sinus infections, which will also leave you feeling slow.

One study found that among more than 3,800 sufferers of allergic rhinitis, only 3.6 per cent of them said they had 100 per cent sleep adequacy, meaning they slept well and got enough shuteye. (But keep in mind that only about 19 per cent of people without this problem had 100 per cent sleep adequacy, so 3.6 per cent is really low, but nobody else’s sleep is perfect, either.) If you’re congested and not breathing normally, it makes sense that you wouldn’t sleep well, says Courtney Jackson Blair, M.D., owner of Allergy and Asthma Associates, P.C. in McLean and Sterling, VA.

Research has found that exam scores tend to be lower when exams are done in allergy season. “If we could measure work performance as easily as exam scores, we’d likely find something similar,” says Dr. Blair. People come to her complaining of not being on their game, or struggling through doing what they need to do at home.

It’s possible that histamine release at some level might affect how the brain functions. “That’s more theoretical,” she says. “I think it ties mostly back to a lack of sleep.”

Scientists from the Head and Neck Institute at the Cleveland Clinic found that people with seasonal allergies saw a decline in sexual function. Which makes sense, since there’s little about sneezing, wheezing, and watery eyes that register as “I feel really hot.”

Sudden allergies to fruits you were fine with before

Certain fruits—like bananas and melons—contain compounds that are very similar to the pollens in trees or ragweed. So when you eat them, you may get the kind of reaction you get when you spend time in nature, says Hurwitz.

In fact, when you’re in allergy season and you have symptoms, “even non-allergens can be irritating, too,” says Dr. Blair. “Perfumes, paint fumes, and even pollution can be harder to withstand when you’re already inflamed with allergies.”

Congestion doesn’t always stay put, and when it drips down the back of your throat, you can find yourself in a state of constantly trying to clear it out. In some people, throat clearing even turns into a habit.

When you’re really plugged up with mucus and your membranes are swollen, it’s hard for any fluid to drain out of your sinuses. That means bacteria can settle in there and thrive. Couple that with mouth breathing due to a stuffed nose and you have a recipe for bad breath.

This article originally appeared on Men’s Health US.