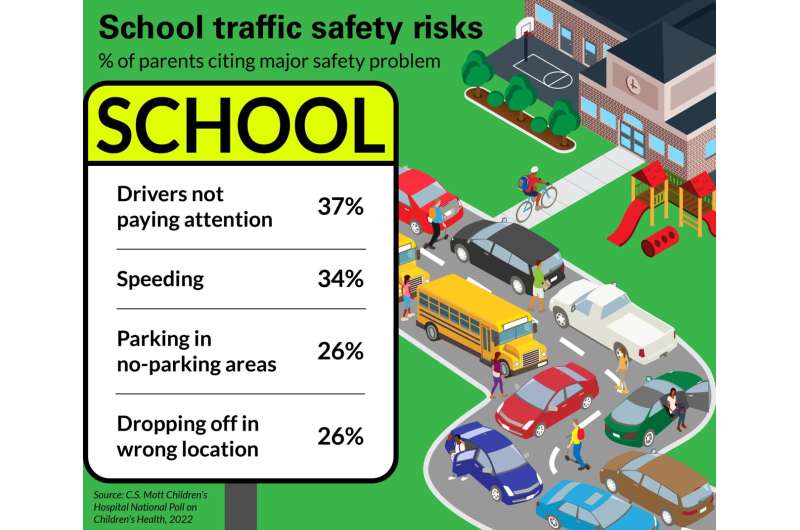 For some elementary and middle schoolers, one of the most nerve-wracking parts of the school day starts before the first bell even rings: morning drop off.

Rushed drivers. Vehicles in the wrong spot. Children trying to get through the snarl of cars and busses.

And many parents in a new national poll agree that school traffic can be hazardous to student safety, with over a third saying parent drivers speeding and not paying attention are major problems around their child’s school.

One in three parents even go so far to say that those who evade traffic rules should be banned from entering the school parking area, according to the C.S. Mott Children’s Hospital National Poll on Children’s Health at University of Michigan Health.

“Many parents dread returning to the daily hassle of getting kids to school and one of the top concerns involves children safely walking through car and bus traffic,” said Mott Poll co-director Sarah Clark, M.P.H.

Nearly a third of parents worry about their child’s safety to and from school with more than a quarter believing it’s likely that a child will get hurt near the drop-off area, according to the nationally representative poll based on 923 responses from parents of children ages six to 12.

Getting a ride to school is common for elementary and middle school students. More than half of families polled say their children and adolescents travel to school by car compared to riding the bus and only one in 10 children walk or ride a bike or scooter to school. Nearly half of parents also say their child walks through the car drop-off or pick-up area when going to or from school.

In addition to speeding and distracted drivers, other major safety concerns include parents parking in no-parking areas, dropping off in the wrong location, children not staying on the sidewalk and bus drivers not paying attention.

“Most schools have a plan to manage traffic and minimize the need for children to walk in front of or between cars,” Clark said. “When parents don’t follow these rules, it disrupts the traffic flow and may mean other parents have to drop off or pick up their child in the middle of the road. This situation may be even more dangerous if parents are distracted by phones or in a hurry.”

Nearly all parents say that school officials should take action when parents skirt traffic rules near the school. Two-thirds of parents think the school should put up cones, gates, or other barriers to better direct traffic flow while three in five say law enforcement should give warnings or tickets to parents who violate traffic rules.

While most parents say their school area is always supervised by a school official or safety officer, just over two thirds rate the level of supervision as good.

She notes that elementary school-age children may be particularly vulnerable to traffic-related injuries because they are less skilled at judging when it’s safe to cross the street.

“Parents should first ensure they are consistently following the traffic rules themselves. They can also take steps to prepare their child to travel safely to and from school by making sure they always look both ways for traffic,” Clark said.