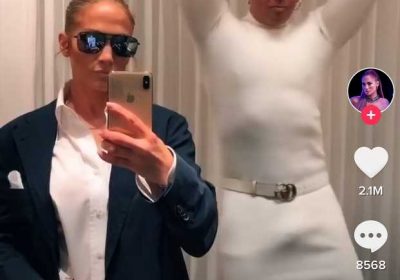 The family that TikToks together stays together!

Jennifer Lopez and Alex Rodriguez joined their kids for an impressively coordinated dance video posted to the singer’s TikTok account on Thursday night, where the group of six lined up to individually take the spotlight one by one.

Once the song began ("Something New" by Wiz Khalifa ft. Ty Dolla $ign), Rodriguez, 44, kicked off the front of the line, performing two elbow jab moves, a shimmy and a clap before moving out of the way and letting his daughters, Natasha Alexander, 15, and Ella Alexander, 11, shake it out.

Next came Lopez’s 12-year-old twins, Emme Maribel and Maximilian “Max” David, giving it their all while their superstar mama, 50, brought up the rhythmic rear.

“When the whole fam agrees on a TikTok🥰,” Lopez captioned the video.

“What’s a TikTok?” Kourtney Kardashian, Laura Dern and More Celebs Who Learned How to TikTok from Their Kids

The fun clip is only the latest on Lopez’s account to feature her adorable family. In another video posted earlier this week, Max showed off his hoverboard skills in their yard while pouring a can of Perrier into a paper cup and simultaneously doing spins on the device.

Lopez and Rodriguez proved they were on the TikTok trend train earlier this month, appearing in a video that saw them nailing the viral “Flip the Switch” challenge, for which users change outfits to the tune of Drake‘s "Nonstop."

Posing in front of a mirror alongside her beau, Lopez danced to the song while wearing a fitted white belted dress with long sleeves and a cut-out back. Meanwhile, Rodriguez stood perfectly still while recording his fiancée, dressed in a blazer, a white shirt and khaki pants, finishing the look in dark sunglasses.

After the lyric “I just flipped the switch” played, the scene jumped to the two hilariously wearing each others’ ensembles. While Lopez looked ready for business in her fiancé’s attire, the retired MLB legend appeared to be holding in his laughter as he busted a move in his bride-to-be’s sexy look — hoop earrings and all.

Many celeb parents have joined in on the TikTok craze thanks to their kids! Stars like Courteney Cox, Busy Philipps, Laura Dern, Reese Witherspoon, Victoria Beckham and more have shared clips with their youngsters.

Dern’s 15-year-old daughter, Jaya Harper, posted a video of the actress, 53, literally stealing the show as she grooved to Doja Cat‘s song, "Say So," which has also earned itself a dance challenge on the app. Jaya Harper captioned the video, “Mom takeover,” adding the hashtag “#disaster” for good measure.

Beckham, 45, truly brought the spice to her kitchen when she danced it out with her 17-year-old son Romeo James —  and the former Spice Girl proved she’s still got it, nailing every memorable move from her girl group’s hit "Spice Up Your Life" while Romeo tried to keep up alongside her. (Sadly, he has since taken the video down.)

“He came home the other day and he said, ‘You know, Mom, I’ve just joined TikTok, will you do a dance with me?’ And I was like, ‘Yeah, what should we dance to?’ He said the Spice Girls,” she told Ellen DeGeneres in November. “And then he took my phone, he posted it on my Instagram, and he said, ‘That’ll get my numbers up.’ “