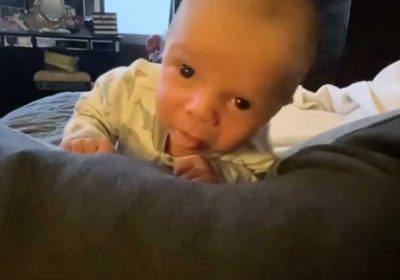 On Wednesday, the Real Housewives of Potomac star, 32, revealed the name of her newborn son, who she welcomed with husband Michael Darby on March 2.

Ashley announced the exciting news alongside a series of professional photos of her baby boy on Instagram.

"It is with the biggest, happiest and most grateful hearts we introduce our little angel, Dylan Matthew Darby. Born on 3/2/21 weighing 7.9 lbs, he has been the best addition to our little family," Ashley captioned a picture of baby Dylan wearing a white newsboy cap.

The couple also shares 19-month-old son Dean Michael, who Ashley said "loves being a big brother and covers the baby in kisses and hugs all the time."

"It's the most incredible bond to witness flourishing," she added.

The mom of two also thanked her followers for their "well wishes" and for "being patient as we settle into our new normal."

"This is even more amazing than I thought it'd be ♥️," Ashley gushed.

Ashley also posted another adorable photo of her newborn wearing blue and green flannel bottoms with a matching hat.

"I didn't know my heart could hold this much love 💕," she wrote.

On Thursday morning, Ashley shared a video of her baby boy as he cooed and stuck out his tongue.

Earlier this month, the reality star announced the birth of her son in a video from her hospital bed while holding her newborn.

"Hello, my darlings. Thank you all so much for the kind and warm wishes that you sent to us," she said in the clip. "This is our sweet baby born today. He's absolutely incredible and amazing, and we're over-the-moon excited."

"Michael just left the hospital to go be with Dean and give him some loving, and it's crazy how much I miss my son right now even though I'm so happy and so blissful with this little guy," the mother of two continued. "I just want us all to be together as a family and I know it'll happen soon."

Ashley added, "This journey of motherhood just really keeps on getting better."

Ashley revealed the sex of her baby on the way in November alongside a video of herself sharing the happy news with Michael, in which the businessman can be seen riding his bike around Washington, D.C., before arriving at a blue banner that reads: "It's a boy!!!"

The former pageant queen announced her pregnancy in early September, posting an Instagram video of her son wearing a shirt that read: "I'm Gonna Be a Big Brother." In the caption, Ashley wrote, "There's no hiding this big belly anymore! We are elated to share our news with you! To say we are thankful is an absolute understatement."