Home » Family Health » Pregnant Scheana Shay Reveals the Sex of Her Baby on the Way: 'I Am So Excited'

Pregnant Scheana Shay Reveals the Sex of Her Baby on the Way: 'I Am So Excited' 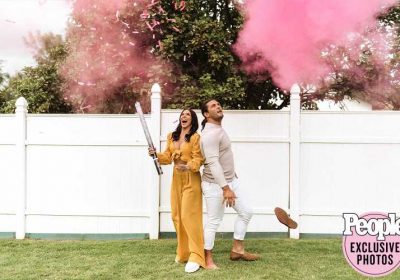 There's a daughter on the way for Scheana Shay!

The Vanderpump Rules star, 35, shares exclusively with PEOPLE that she and boyfriend Brock Honey Davies' first child together will be a girl, alongside images and a video of their pink-powered reveal.

"I'm just excited to be having a healthy baby," Shay, 35, says of how she feels about expecting a daughter. "After the miscarriage and getting pregnant so quickly after, I just prayed for a healthy baby. But I am so excited to put the biggest bows in my little girl's hair and spoil her with unicorns!"

"I was just praying and hoping all the genetics and tests came back okay," she tells PEOPLE. "I hope to have two or three kids and I want both a boy and a girl or two, so it didn't matter the order to me!"

Davies' shoe is noticeably flying off after the reveal, during which Shay set off "a powder/confetti cannon" and her beau "kicked an exploding rugby ball at the same time." As a result, "He kicked it so hard that his shoe flew off and went over the fence into the neighbor's yard," she recalls. "We tried to keep the numbers down where we could since I have so much family here, so we ended up doing a second reveal down in San Diego where James Kennedy and some of our other friends could join," she says.

When it came to getting everyone in the same place, the Bravo star tells PEOPLE, "It was so much fun tricking my friends and family into coming to a 'luncheon' for my vlog and surprising them with not only the news that I am pregnant, but [getting] to find out what we are having!"

Shay says that she has "always had my girl name that I've wanted since high school," adding, "I still love the name; I think it's timeless." And though they don't have a middle name solidified just yet, "Thankfully, Brock also loves" the first name she has had chosen for years. Luckily for the couple, they didn't have to debate — though it was a different story before they knew they had a daughter on the way, when they were still considering names for a son too.

"All the names I've always liked for a boy, he's like, 'No, no.' I was like, 'Damn it, we got to go back to the drawing board,' and then it just came to me," Shay says. "Both names have some meaning about the time we conceived and the fact that this is my rainbow baby." Scheana Shay Reveals She Is Pregnant Again After June Miscarriage: I'm So Excited to "Be a Mom"

Shay revealed last month to PEOPLE that she and Davies are expecting their first child together, after previously sharing in June that she had suffered a miscarriage.

As for learning the baby's sex, "We agreed to wait to find out until we're in our second trimester, it's safe, we got all the genetics back, everything is good, the baby is healthy, the heartbeat is great," she says.

"I've never wanted to do a delivery surprise," the reality star continues. "I've always said the second I can find out at an ultrasound, I want to know in that moment. But now that reveal parties are such a thing and it's an excuse to get together with my family in a small group … which, it's not the way I would normally do it, without the pandemic, but I still [wanted] to celebrate with my family."

"None of them [knew], so [we were] like, 'This would be something cool to find out and have that reaction caught on camera instead of just finding out in the doctor's office, just the two of us,' " Shay adds.