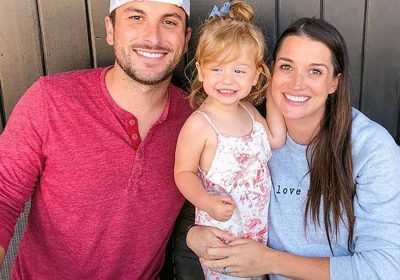 “You all, these are NOT okay messages to send to people,” the former Bachelor contestant said in one of her Instagram Stories on Thursday over a screengrab of a troll who said her daughter, who turns 2 in August, seemed to be showing signs of autism.

“If you all mean well, it’s still not ok to say she has Autism or needs speech therapy or to comment any sort of thing like that to anyone about their child,” the mother of one (and soon to be two) continued. “We are her parents, we have a great pediatrician, and we know her development.”

“Comments like this really throw me for a loop,” she added.

In another post shared on her Instagram Stories, Jade continued to say that she believes there should be some more “etiquette” on the internet.

“I’m saying people would never come up to someone in public and say these things,” she said over another rude comment. “You don’t get to go rogue because you’re behind a keyboard.”

Jade defended Emerson’s development, saying that the soon-to-be big sister “knows plenty of words,” and that she doesn’t post content of her child for the internet’s criticism.

“She is not a monkey to dance for you,” she said.

“I’m just going to assume the people commenting these things are NOT parents, because they clearly don’t have a clue,” she concluded.

This isn’t the first time Jade has spoken out against online haters.

When she was still breastfeeding Emerson — who she and husband Tanner Tolbert call Emmy for short — the Bachelor in Paradise alum received criticism for putting a cover over her baby while breastfeeding at a restaurant.

“Yesterday, I posted a picture of me breastfeeding at the table in a restaurant because it was the first time I had actually done it … I have always gone into the bathroom to breastfeed because I felt like I couldn’t do it in public,” she said. “And people were telling me that I shouldn’t cover up and I was actually getting flack for putting a cover over my baby, which I just don’t understand. Why that would be something people would give me s— about?”

“My baby is feeding right now, and I’m still going to cover up because that’s what I feel the most comfortable with,” she continued. “I feel like I don’t need to share all of that with the world — that’s not the message, it’s just that women should be able to do what they feel they need to do for their babies.”

Despite the online drama, the Tolberts are looking forward to welcoming their second child, a boy.

“All I feel like doing is nesting into our home, cuddling and focusing on this baby coming,” Jade said in an Instagram post on Wednesday after an appointment with her midwife. In the photo, she’s cuddling with Emerson and shows off her baby bump.

“I feel such an inward shift in my thinking and a deeper connection to my body and to the baby. Loving extra on this girl lately, too, before everything changes. ❤️,” she added.