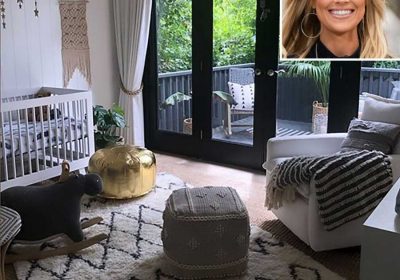 Christina Anstead and her husband Ant Anstead are getting everything in order before the arrival of their baby boy!

On Tuesday, the Christina on the Coast star, 36, gave followers an inside look at their impending first child’s “boho vibes”-themed nursery on Instagram.

“Excited to share our little guys nursery. loving the boho vibes #babyanstead @ant_anstead 💫💙,” she captioned the video giving a short tour of the room, before excitedly adding, “8 week countdown starts this week 👏🏼🙌🏼.”

In the clip, the mom-to-be showed off the white, navy and beige-colored room, which included a changing table/dresser, a recliner, a crib, a mini table with chairs and an adorable hippo rocker.

To create more of a “boho vibe” to the room, Christina added lots of plants, a fuzzy rug, a star mobile, a giant dream catcher and pulled the curtains away from the doors that led out to a private deck with rope.

Christina, who is already mom to two children with ex-husband Tarek El Moussa, first teased fans about the nursery a few hours earlier.

In a short clip on her Instagram Stories on Tuesday, the star gave a preview to the baby’s new room, which also saw her 3½-year-old son Brayden James riding his little brother’s hippo rocker.

“Sneak peak [sic],” she captioned the video while also tagging Ant, 40, in the post.

She later shared two more photos of the room, taken from different angles, that showed off the nursery’s interior design and adorable features in a clearer shot.

For the first image, Christina simply posted a blue heart and tagged her husband.

The nursery’s theme also matched the baby shower that was held for Christina just a few weeks earlier.

On June 30 — three months after announcing that she and Ant are expecting their first child together — Christina celebrated her baby shower at the Balboa Bay Resort in Newport Beach, California.

The Flip or Flop star was honored at a “boho baby shower of [her] dreams” for her son on the way, hosted by her “bestie/publicist Cassie” — which she told PEOPLE was “such a dreamy day.”

In attendance at the shower were 24 close friends and family members including Christina’s 8½-year-old daughter Taylor Reese, her mother Laurie Haack and sister Carly Haack, as well as her grandmother, cousin and aunt — plus a surprise appearance from Ant at the end!

“[Brayden’s] highlight was the blue donuts; he was constantly scoping the dessert bar,” Christina joked to PEOPLE of her younger child. “Baby Anstead is so blessed to enter into such a loving family — we all can’t wait to meet him!”

RELATED: Pregnant Christina Anstead Shows Off Her 31-Week Baby Bump and Reveals She Has Gained 22 Lbs.

Throughout her pregnancy, Christina has kept fans in the loop with her progress and has often shared photos of her growing bump.

Just last week, the star posted a picture of herself on Instagram at 31 weeks along, as she displayed her baby belly under a pink patterned maxi dress.

In her caption, Christina shared that she had a “great day filming” her show, and would be beginning her maternity leave in three weeks’ time.

“Finishing up the nursery over the weekend (I’ll post pics soon) — already feeling those nesting vibes which means not sleeping great,” the mom-to-be continued in her caption.

“Up 22 lbs so even my big gym pants are tight and maxi dresses are a must. Oh the joys 🤰🏼😂,” she added, concluding with the hashtag, “#31weekspregnant.”

Ant, meanwhile, couldn’t resist chiming in with a sweet compliment for his glowing wife, writing, “The prettiest EVER 😍❤️🔥🔥”