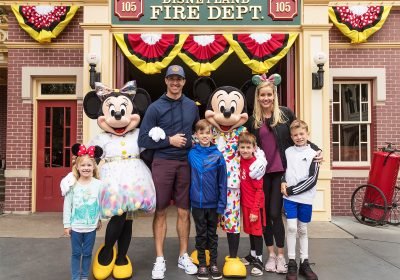 Drew Brees is going to Disneyland — even without a second Super Bowl ring.

The New Orleans Saints quarterback, 40, took his family of six out for a day of fun at the California amusement park on Monday, marking his 4½-year-old daughter Rylen Judith‘s first trip to the Happiest Place on Earth.

Brees and wife Brittany posed for photos with Mickey and Minnie Mouse alongside Rylen and her three older brothers: Callen Christian, 6½, Bowen Christopher, 8, and Baylen Robert, 10.

Rylen celebrated her inaugural visit to the park with a pair of traditional Minnie Mouse ears and a Cinderella shirt, while Brittany also sported a pair of sparkly pink-and-green ears.

From Famous Purple Walls to Hidden Gems: All the Best Spots to Snap a Photo at Disney Parks

Mickey and Minnie, meanwhile, were wearing special colorful outfits as part of Get Your Ears On — A Mickey and Minnie Celebration, which features various events celebrating Disney’s signature romantic duo ahead of Mickey’s 90th anniversary.

The Brees family smiled for the camera in front of the Disneyland Fire Dept. attraction on Main Street — and the athlete made sure to also mug for the camera with just Minnie and Mickey Mouse.

The record-breaking NFL player is no stranger to the House of Mouse. In 2010, he appeared in the famous “I’m going to Disney World!” commercial for the brand after his Saints won Super Bowl XLIV, besting the Indianapolis Colts 31 to 17 in Miami Gardens, Florida. He later appeared in a parade at the Magic Kingdom, and often makes the trek from New Orleans to visit the Orlando, Florida-based resort with his family.

Brees famously lifted son Baylen, his only child at the time, into the air after the Saints’ first-ever Super Bowl championship that year — where the then-1-year-old was more interested in grabbing at the celebratory confetti.

Brees’ team narrowly missed out on another Super Bowl appearance this year, falling to the Los Angeles Rams in a tough NFC championship loss. The Rams took the lead with an overtime field goal following an allegedly blatant controversial pass-interference call miss from the referees.

“[It has] been difficult, it was a heartbreaking loss. Obviously, we all had the expectation we would be here and obviously had worked so hard for it. You have to worry about the things that you can control, and that’s something we don’t control,” Brees said on the Today show in February.

“As we think about and look forward to next season, I love our team and the opportunity that we have,” he added. “I think we have the best fans in the country in all of sports, and their passion and emotion was certainly felt after that game, [and] over the last week and a half.”