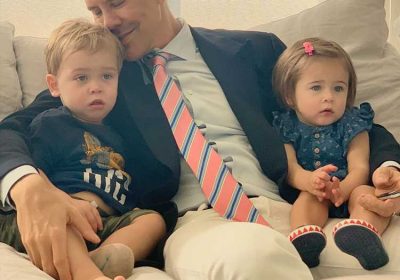 The Million Dollar Listing star, who shares 2-year-olds Milla and Fredrik Jr. with Derek Kaplan talked to PEOPLE about his two kids and the family’s transition to the West Coast.

“It’s been quite a transition,” the 42-year-old tells PEOPLE. “Overall it’s been incredible. People ask me why I moved to Beverly Hills from New York after 17 years, I always say the main reason is the kids.”

The real estate mogul announced in July 2019 that he’d be making the official move to Los Angeles, surprising many as he is one of the top brokers in New York City.

Never miss a story — sign up for PEOPLE’s free daily newsletter to stay up-to-date on the best of what PEOPLE has to offer, from juicy celebrity news to compelling human interest stories.3

“They’re so obsessed,” he says. “They’re in the pool every day and they’re super, super happy. I feel torn because one side of me wants to spoil them, I just give them everything that they want but also another part of me is really jealous because I certainly didn’t have a childhood like that, but it’s just lovely to see them enjoying it so much.”

As the kids continue to grow, Eklund admits that raising his little pair can be “a lot.”

“I get blinded by them every day, they’re just the most beautiful little creatures,” he swoons. “It’s a lot having twins, any twin parent would agree. It’s so intense, but it’s also incredible. It’s the most beautiful, most important thing I’ve ever done. It’s exhausting but totally worth it.”

The twins have also made their first big film debut — well, sort of.

The two toddlers have roles in the Million Dollar Listing New York star’s hilarious Star Wars-inspired listing video which he created to help him sell a $32 million Beverly Hills home.

“I’ve never done anything with my kids,” Eklund tells PEOPLE. “At first I was a little hesitant to bring them but I’m so thankful and happy that they came. We had a face painter there for the kids. My daughter was a rabbit, my son became a dolphin and they were wearing the Star Wars-inspired outfits with their lightsabers. It’s really amazing.”

The clip follows Eklund and co-lister Ben Bacal as they prepare to do battle by both training and relaxing throughout the home’s 12,800-square-feet while dramatic music plays in the background.

The two-story home at 1231 Lago Vista Drive features seven bedrooms, 11 bathrooms, floating staircases and a six-foot chandelier, so there is lots of space to cover.

At the end of the clip — just before the two battle it out with lightsabers — viewers are brought back to reality: an adorable kids’ birthday party featuring Eklund’s own children.

Last month, Eklund opened up to his 1.2 million followers about raising his two adorable kids.

“Their personalities are really coming out now and we laugh so much at their ideas and antics. Freddy is the biggest cuddle baby still and so sweet and always want dada to read books and draw paintings of sharks,” he wrote about Fredrik, Jr. “He won’t stop growing and all the girls and I’m sure some boys want to be his friend. He says sharks are ‘mean’ and that dogs are ‘nice.'”

“Milla, on the other hand, runs the family,” he wrote about his daughter. “She calls herself Boss and Queen and her favorite movie is Wonder Woman. Her favorite word is ‘Stop!’ as she puts her hand out forcefully.”

And as the real estate star continues to settle into Los Angeles with the kids, he says he “can’t comment” on whether he’ll be joining the Bravo show’s Los Angeles version.

“I’ve become close to the L.A. cast now that I live here and I’ve been interacting with them a lot, and you know, squint squint, I can’t say anything,” he teases.

Fans began speculating about the switch to the L.A. show after Eklund shared a photo with Tracy Tutor and Josh Flagg with the caption “Yup it’s happening 😏.”

Eklund says he “looks up to all” of the L.A. cast members and says he’s been hanging out with them a lot.

“The L.A. cast has been here forever,” he says. “They know every property and I come and I bring something new for LA and a bigger outreach, maybe in terms of national and international clientele. But I still want to cooperate so I’ve really been excited to hang out and get to know them all.”