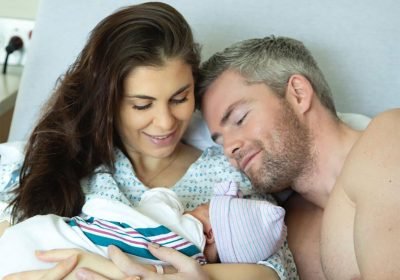 The Million Dollar Listing New York star, who welcomed his first child with wife Emilia Bechrakis on Feb. 26, revealed the name of his baby daughter while celebrating her first seven days in the world.

“Happy 1 week Zena ☺️” he wrote on Instagram Tuesday, alongside an adorable photo from her newborn photo shoot.

In the shot, Serhant, 34, leans down and snuggles into his snoozing daughter, who is wrapped up in a white blanket and wears nothing but a tiny pink beanie.

The name Zena is Greek in origin so seemingly pays tribute to Bechrakis’ Greek heritage. Other than that, however, it is not immediately clear why the couple chose to name their baby Zena and if there was any other meaning behind her name.

On Sunday, Serhant announced via Instagram that he and his wife of nearly three years welcomed their daughter just five days earlier.

In the post, Serhant revealed that he and his wife “waited almost 3 years to meet” their daughter and detailed the emotional process it took for them to get to the point of becoming parents, writing a lengthy message addressed to the newborn.

“We had no idea how difficult getting pregnant with you was going to be,” he wrote. “We tried everything. We were so nervous you might never come. When we finally decided to try IVF, we were so scared it wouldn’t work. And then you stuck. And then we heard your little heartbeat for the first time. Your mom and I were so excited every time we would go to the hospital to see you, but even more terrified we would lose you.”

Continuing, he added, “Because the fact that we were pregnant — as beautiful as it was — was almost too good to be true. And because of that fear, we loved you as hard as we could from the moment we knew you existed. We thought if we put that love for you out there, you would hear it, and you would make it. I watched you grow slowly with your momma every day, waiting for the moment I would finally meet you.”

Sharing her own hospital snapshot, Bechrakis wrote that she still “can’t find the perfect words to describe how madly in love I am” and revealed how “Every night, I prayed with all my soul that you were healthy and thanked God for the miracle that you are.”

Days after welcoming her baby girl, the new mom also got candid about the conflicting emotions surrounding the birth of a child in a stunning black-and-white maternity photo of her bare baby bump.

“I felt such a need to be private about my pregnancy on social media because I had so many ups and downs,” wrote Bechrakis. “I found the anxiety overwhelming. But through all the fears, scares, sickness, and aches, I loved every moment. Even the hardest moments. Every kick, every hiccup, every heartbeat, every ultrasound visit … “

“I know this sounds crazy but I miss my belly already,” she continued. “Having my baby safe in my belly … carrying her around with me everywhere. Now I stare at her all day and night because I don’t want to miss a single thing. Feeling those baby blues ?”

In September, Page Six was the first to report the happy news that Serhant and Bechrakis were expecting their first child. The couple, who married in July 2016 on the island of Corfu in Greece, have been undergoing fertility treatments throughout the most recent season of MDLNY.

The pair have been open about their wish to start a family. “I’ve been looking forward to being a mom but I just always expected that it was going to be easy,” Bechrakis said in the season 7 trailer while in episode 5, they dived into the realities of IVF.

The teaser for the season 7 finale gave the biggest hint about their baby, though. At the end, Bechrakis could be seen smiling and handing Serhant a small cardboard box. He opened it, looked inside and said simply, “Oh, man.”