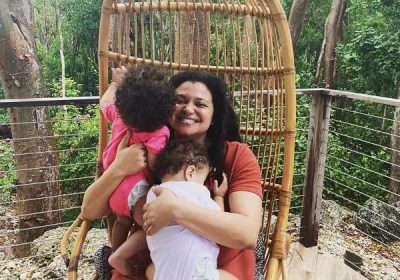 Michelle Buteau is "forever thankful" for her surrogate for helping bring her now-20-month-old twins Hazel and Otis into the world, but it took her a little while to come around to the idea that her road to motherhood might look different than she'd initially envisioned.

In this week's issue of PEOPLE, the actress and comedian reveals that she and husband Gijs van der Most were "at the end of [their] road in terms of" Buteau "trying" to carry a baby, having gone through in vitro fertilization and beginning to see the toll it was taking, both on her mind and body.

"My husband said, 'You know, I want you back. You are so unhappy and just physically wrecked,' " says Buteau, 43.

While "surrogacy is not something you go into IVF thinking, 'This is what I'm going to be doing,' " the Always Be My Maybe actress recognizes that it's "so beautiful that that is even a choice," even though it was "scary."

"I didn't know anyone that did it," Buteau says. "I didn't have anyone to talk to about it. I just researched. I found an agency through my doctor where these women are just walking angels on Earth who find helping someone make their dreams come true the best thing ever." the family that punks together, stays together ✊🏽 @afropunk 2019

"I'm just forever thankful," adds the mother of two. "I text [my surrogate] all the time, [with] pictures. And I'm just like, 'Thank you so much.' "

While struggling with infertility, Buteau tells PEOPLE one part that "really was hard" ("and anybody that has had a miscarriage can understand," she notes) was "when your friends are pregnant at the same time and then you experience a miscarriage and then you see that kid grow up and always think in the back of your mind, 'Oh, my kid would have been this age.' "

"Just seeing your friends in general with kids or anything that you are yearning for. It's very hard to be around," she adds. "That was even hard for me because I'm not a jealous person. I'm happy for people, but this was a new side of me where I was like, 'I need to be happy for you, but at a distance.' "

And holding her babies (who were born premature) for the first time was nothing short of "bananas." As Buteau explains, "Now I know why people faint. It isn't because there's blood or whatever. It's because it really is a miracle." "You can imagine what they look like but it doesn't mean anything until you see them and you're like, 'Who is this little person? I'm so glad I got to meet this soul,' " she recalls.

The Survival of the Thickest author shares with PEOPLE that she "always wanted kids" — and once she met her husband, with whom she just celebrated her 10th wedding anniversary, she knew she had hit the jackpot despite the fact that she thought she'd never get married.

"And then having kids with them, it was just like 'Good night. Good night, everybody.' And I ended up like, 'There's not enough champagne to celebrate what we got going on.' "

For more from Michelle Buteau, pick up the latest issue of PEOPLE, on newsstands now.