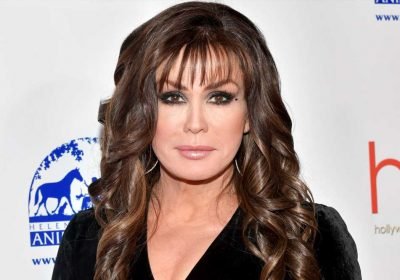 Marie Osmond is asking her followers to send well wishes for her new granddaughter.

On Thursday, the longtime singer revealed that her daughter Brianna Blosil Schwep, 21, and her cinematographer husband Dave Schwep, 42, had welcomed a baby girl.

The newborn, who is Dave and Brianna’s first child together and weighed in at 6 lbs. 10 ounces, was taken to the NICU in one of the Children’s Miracle Network Hospitals, Osmond explained.

CMN Hospitals are particularly near and dear to Osmond’s heart, as she helped co-found the non-profit organization that raises funds for children’s hospitals, medical research, and community awareness of children’s health issues.

“Asking for prayers for my precious granddaughter born this evening 6lbs 10 ounces,” she tweeted. “So thankful she was able to be taken to children’s ICU in one of our amazing @CMNHospitals #gratitude that she is in their care!”

At this time, it is unclear why Osmond’s granddaughter was taken to the NICU, though the baby did arrive 10 days late. (Her original due date was May 13, according to Brianna and Dave’s Amazon registry.)

Representatives for Osmond and the Schwep family did not immediately respond to PEOPLE’s request for comment.

Brianna and Dave first got engaged last November. In a post on Instagram, Dave announced the happy news alongside a photo of the pair showing off their new rings.

“I am so honored and grateful to be engaged to marry my best friend and lover Brianna Patricia-Lynne ?❤️❤️❤️” the cinematographer/director wrote.

In December, he announced that the couple had tied the knot in an intimate ceremony with their parents and expected to have a bigger celebration with family and friends in 2019.

“Brianna and I committed to each other in a private ceremony with our parents. We look forward to a larger celebration with our friends and family in the coming year. I am so grateful to be sharing my life with such an amazing human ?❤️ #soulmate #MrandMrsSchwep#schwepic” he captioned the scenic, water-side shot.

RELATED: Marie Osmond Recalls the ‘Scars’ Left by Body Shamers and How She Overcame the Scrutiny

Just a few months later, the couple announced they were expecting a child together in a sunset-silhouette shot taken at the Wisdom Tree in Los Angeles.

The following month, Osmond and her family proudly celebrated her daughter’s baby shower with several photos from the event on Instagram.

“Such a special time celebrating my next grandbaby!! Thank you to Brianna & Dave’s incredible hosts and dear friends @sheenayaitanes & @gregyaitanes. It was such a beautiful shower and a wonderful day to spend time with family and friends. #schwepicbaby ?❤️ ” she wrote alongside the family shots.

RELATED: Marie Osmond Says She and Donny Osmond Will Likely Retire from Las Vegas This Year

Brianna is one of Osmond’s eight children.

In addition, Osmond is already a grandmother of four, and expecting another little grandson from her daughter Rachael in July.

The singer has soaked up every moment of being a grandma and recently posted about her “darling grandkids” in March.

“I absolutely love this picture, look at my sweet husband and darling grandkids, and now we have two more on the way!” she wrote. “It’s so thrilling but I have to be honest with you, when I looked at this picture I thought, ‘where has time gone? Wasn’t it yesterday these sweet little ones were my own children?’”

“I’m so thrilled my kids are married to wonderful people and have started families of their own, there’s no greater joy on earth… But… Where did the time go?” she added.