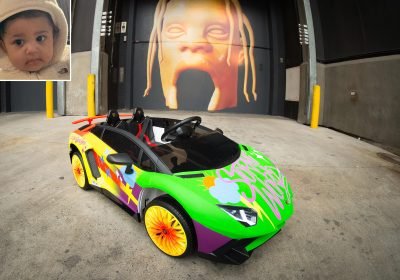 Baby Stormi has a new whip!

The little tot, who turned one last month, is the newest member of the Lamborghini club alongside her famous parents Kylie Jenner and Travis Scott.

On Sunday, following Scott’s performance at the Barclay’s Center in Brooklyn as a part of his Astroworld — Wish You Were Here Tour, the concert venue gifted Stormi with a custom sports car of her own.

The tiny, multicolored vehicle says “StormiWorld” on the front, written in a graffiti font as well the phrase “Wish you were here” just above the tires — of course, a nod to Scott’s tour.

The car’s colorful design was created and handpainted on by New York artist Andrea von Bujdoss aka “Queen Andrea.”

StormiWorld was also the theme of the baby girl’s lavish first birthday party on Feb. 10.

Stormi’s Lamborghini, which also glows in the dark, has a license plate, that reads “STORMIW3B.”

In March 2018, Jenner, 21, showed off her and boyfriend Scott’s rides on Instagram.

In the shot, a bright orange Lamborghini Aventador can be seen parked next to what appears to be a matching model in a darker hue.

“Mom and dad,” Jenner wrote over the photo.

Before Scott’s stop in Brooklyn, the “Stop Trying to Be God” rapper, 26, performed at New York City’s Madison Square Garden on Saturday where he showed Jenner some love amid their rumored relationship drama.

According to a video obtained by TMZ, the rapper closed out the show with his hit “Sicko Mode” with the line written about Jenner: “Baby mama cover Forbes, got these other bitches shook.”

The line refers to the reality stars’ 2018 Forbes cover story, in which the magazine predicted that as her Kylie Cosmetics empire is worth $900 million, Jenner is on track to become the “youngest self-made billionaire ever.” On Tuesday, Jenner earned the title of billionaire, according to Forbes.

The rapper then addressed the crowd, saying, “I love y’all N.Y.C.,” before mentioning Jenner.

“Love you wifey,” he added, using an affectionate nickname he’s called Jenner many times before, even though the pair aren’t married or engaged yet.

Although Scott made no direct reference to any cheating allegations, he told the crowd, “Remember to keep your family first,” TMZ reported.

Late Thursday afternoon, TMZ reported that the Keeping Up with the Kardashians star had accused her boyfriend of cheating on Wednesday, which prompted Scott to cancel his tour stop in Buffalo, New York, and remain in Los Angeles, where the couple got into an argument.

A rep for Scott went on to strongly deny to PEOPLE that he was unfaithful and that he and Jenner had a fight about cheating. A rep for Jenner had no comment.

Shedding some light on why Jenner suspected Scott of cheating, a source recently told PEOPLE that the Kylie Cosmetics mogul has experienced trust issues amid the Tristan Thompson–Jordyn Woods cheating scandal.

“Kylie had a rough week,” the source said of the drama. “She is still devastated about Jordyn and had an argument with Travis after she checked his phone and saw something that she didn’t like.”

However, according to the source, “Travis says he didn’t cheat.”

As for what’s next for Jenner and Scott, the source said that “Kylie was upset at first” but “seems better” now.

“She isn’t breaking up with him,” the insider added.