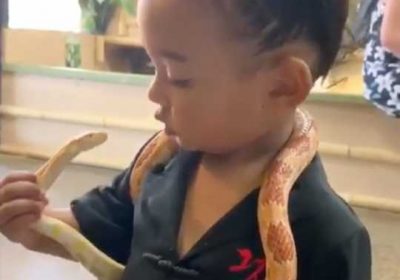 Chicago is a fearless little girl!

On Wednesday, Kim Kardashian West shared a video of her 19-month-old daughter playing with a small snake draped over her shoulders.

In the footage, Chicago gently yet fearlessly grasps the reptile, holding it in her arms nonchalantly as it slithers around her little shoulders. She then giggles when a snake handler shows her another one.

Toward the end of the video, she looks at the camera with a smile and hugs the snake that she’s holding.

“My brave girl Chicago 🐍,” the mother of four, 38, captioned the clip, which was presumably taken while the duo vacationed in the Bahamas this week with Khloé Kardashian and her daughter True, 16 months.

RELATED: Watch Kim Kardashian’s Run-In with the Infamous Fyre Festival “Biting” Pigs in the Bahamas: “I Was Scared”

Fans and followers were in awe, with some joking that Chicago was “braver” than them in the comments.

It has been a week of adventures for Chicago, who joined her cousin True for an adorable snack session in the Bahamas that the Revenge Body star got on camera, showing the girls digging into bags of chips.

Kardashian West has also been posting a lot with her children recently. On Tuesday, she shared an adorable selfie with son Saint, 3½. In the sweet snap, the duo made silly faces at the camera.

Earlier that day, the Keeping Up with the Kardashians star shared another cute post of her kids — whom she shares with husband Kanye West — giving each other the side-eye.

In the post, 6-year-old North acted as a protective big sister over baby Psalm, 3 months, in a series of photographs her mom shared to Instagram that showed North holding Psalm in her lap while Saint sat next to them on a couch.

As the slideshow went on, North became increasingly warier of Saint, who was throwing up a peace sign in the second snapshot while his big sister looked down.

“It was going so good … swipe ➡️ 😂,” their mom captioned the fun post.