Kim Kardashian Is 'Aware' of Controversy Over Psalm's First Photo: 'It Was Staged,' Says Source 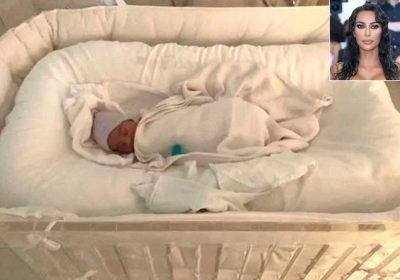 Kim Kardashian West shared the first photo of son Psalm one week ago, and while many fans were taken with how cute the star’s newborn is, others grew concerned over what was in the crib with him.

In the image, Kardashian West’s fourth child with husband Kanye West could be seen swaddled in blankets and resting in a crib that was filled with other soft objects, including crib bumpers, which prompted numerous social-media users to share their concern over the baby’s welfare.

As an expert pointed out to Today, “parents need to avoid using any soft objects in the bed, and this includes crib bumpers, blankets, pillows” and “soft toys,” as those items could make it more difficult for young children to breathe, which could possibly result in death.

A source tells PEOPLE that the Keeping Up with the Kardashians star, 38, is “aware” of the criticism she received.

“Kim is aware that she got negative comments about the photo of Psalm,” the insider shares.

“It was a split-second, staged photo,” the source adds. “As a mother of four, she very much knows how to keep her newborn safe in the crib. Again, it was staged for a photo.”

Pointing out their concerns over the image, many Twitter users urged Kardashian West to follow safe sleep standards to help prevent against SIDS, which stands for sudden infant death syndrome.

“Everything about this picture causes me anxiety,” wrote one concerned social-media user. “Please follow safe sleep habits. It can reduce the risk of SIDS.”

Another user, who claimed to be an emergency-room physician, warned against “all that unnecessary padding.”

“Please please please go pay an overpriced ‘sleep consultant’ to get all that unnecessary padding, bumpers, and blankets out of your child’s crib so they are not at risk for SIDS,” they wrote. “I’ve tried and failed to resuscitate too many children that have died this way.”

Washington Mom Speaks Out After 7-Month-Old Son’s Tragic Baby Blanket Death: “I Have a Lot of Guilt”

The American Academy of Pediatrics recommends that parents place newborn children on their back “on a firm sleep surface such as a crib or bassinet with a tight-fitting sheet.”

Additionally, parents should avoid filling their children’s cribs with soft items, including pillows, blankets and toys, which could obstruct the baby’s breathing or cause them to overheat.

“The crib should be bare,” the AAP recommends.

Although the KKW Beauty mogul has yet to share another photo of her newborn, earlier this week, mom Kris Jenner revealed the inspiration behind her newest grandchild’s biblical name, which means “song” in Hebrew.

“The inspiration was the Book of Psalms in the Bible,” Jenner, 63, told Entertainment Tonight. “I think it’s just a wonderful way to celebrate how they feel. And he’s such a blessing, so it’s perfect.”

A source close to the rapper previously confirmed to PEOPLE that the name was a reflection on West’s recent renewed dedication to his Christian faith.

“Kanye has been going through a spiritual revival lately. Every name has a meaning that is personal between Kanye and Kim and the child,” the insider said. “Psalm is a good reflection of where Kanye and Kim are spiritually.”

Did Kim Kardashian Reveal She’s Done Having Kids? Kanye West Says “We Have Everything We Need”

“Kanye is very involved in choosing the names. He and Kim do exactly what every couple does, where they each bring up names and the other one gives their feedback. It’s very traditional that way,” the source said. “Kanye would never just choose a name that Kim doesn’t like, or vice versa. The names are things that they mutually agree upon.”

The Wests welcomed baby Psalm on May 9 via surrogate and eight days later, the proud new mom revealed his name on social media alongside his first snapshot. The couple also share daughters Chicago, 16 months, and North, 6 next month, plus son Saint, 3.

“He’s here and he’s perfect!” Kardashian West said in her initial announcement, adding in a separate tweet, “He’s also Chicago’s twin lol I’m sure he will change a lot but now he looks just like her.”