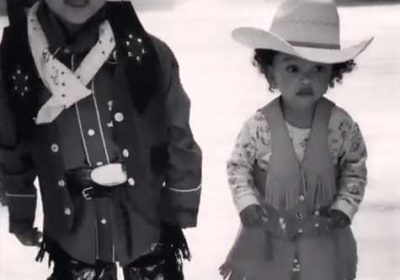 Looks like Saint and Chicago are already getting into the Wyoming spirit!

Hours after Kim Kardashian West confirmed that she and husband Kanye West are considering a move to the state, the Keeping Up with the Kardashians star, 38, posted an adorable video showing off some souvenirs she purchased for her kids during a recent trip there.

“Do you guys love your outfits I got you from Wyoming?” Kardashian West can be heard asking in the black-and-white Thursday video as daughter Chicago, 19 months, and son Saint, 3½, model their western looks.

“Yeah,” replies Saint, who wears a fringed vest and pants and a belted shirt with what appears to be a toy sheriff’s badge affixed to the front, as well as a bandana and a rustic-looking hat.

Standing by his side, Chicago silently shows off her own outfit: a fringed vest and skirt, accessorized with a pair of boots and a light-colored cowboy hat.

Although the couple’s middle children were the only ones featured in the video, their older daughter North, 6, has already shown an affinity for all things western.

The mother of four entered the frame playing a tiny guitar before turning the reins over to North, who donned a Jessie (from Toy Story) costume, complete with a cowgirl hat, and busted a variety of moves in the family’s hallway.

“What we do on maternity leave … Directed and Choreographed by North 🤠” the proud mama captioned the video.

During an appearance on The Tonight Show Wednesday, the mother of four opened up about how much she and her husband, 42, “love Wyoming.”

“It’s always been such an amazing place,” she explained to host Jimmy Fallon. “My husband did just buy a ranch there, and his dream and his vision is to move there.”

However, they’re still deciding just what the move will entail. While West is “so excited to maybe be moving to Wyoming,” Kardashian West said she would prefer to split time between the new ranch and Southern California, where they currently live.

“I love L.A., so I envision summers, I envision some weekends,” she said. “But yeah, we love it.”

A source told PEOPLE earlier this week that West has been visiting Cody, Wyoming, where he has “bought a ranch and is touring local elementary schools.”

The insider said the property — which comes in at just over 4,500 acres — was previously known as “Monster Lake Ranch,” and features panoramic views of the surrounding Rocky Mountains.

“Kanye will be in Jackson Hole for several more weeks,” the source revealed to PEOPLE. “Kim will travel back and forth to see him.”

The insider also said that the rapper and fashion designer “seems great” and “loves Jackson Hole. He thinks it’s the perfect place to create his music.”