Home » Family Health » Khloé Kardashian Says She Has 'Anxiety Thinking True Will Be' Turning 1: 'Bring Me the Tissue'

Khloé Kardashian Says She Has 'Anxiety Thinking True Will Be' Turning 1: 'Bring Me the Tissue' 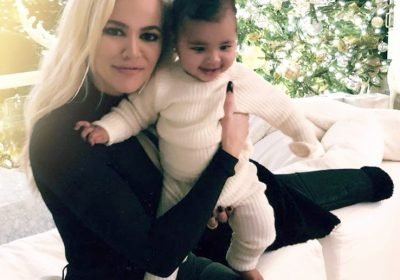 On Wednesday, the mother of one, 34, tweeted about how fast time has flown since the birth of her daughter True Thompson on April 12, 2018.

“Is it weird that I think I’m having anxiety thinking True will be one on Friday?!?!” she wrote. “I’m sad Time is flying as fast as it is. I’ll be happy, of course, I simply can’t understand where the time goes. Thank you Lord for every moment … bring me the tissue.”

In response, one fan wrote, “Omg if you need tissue now you will be an absolute mess at her kindergarten graduation,” to which the reality star responded: “Graduation?! I’ll be a mess day one of preschool lol I can’t think about this.”

Later, Kardashian commented, “It’s so crazy how fast time goes. I guess that’s why we have to make every moment count while we can.”

Though True’s birthday is a celebration, the toddler’s arrival was just two days after her father Tristan Thompson’s alleged infidelities first came to light.

On Thursday, the Keeping Up with the Kardashians reality star seemingly made a reference to her difficult year since the NBA player’s scandal.

Sharing a Nikita Gill quote on her Instagram Stories, Kardashian shared, “If you want to know what it’s like to survive hell and still come out shining brighter than the sun, just look into the eyes of a woman who has survived intense damage and refused to allow it to destroy her softness.”

On April 10, 2018, just two days before Kardashian gave birth to True, Thompson was caught on video getting close to an unidentified woman in a New York City lounge. At the same time, TMZ published footage from October 2017 allegedly depicting Thompson kissing one woman while a different woman groped him at a hookah lounge outside of Washington, D.C.

“Tristan has been consistently cheating on Khloé,” a source alleged to PEOPLE at the time. “He’s a serial cheater. And there will be more women to come out of the woodwork.”

Recently, Kardashian told PEOPLE she’s been thinking about her daughter hitting the one-year mark a lot as of late.

“It’s so corny but you don’t realize how fast time goes by until you see a child growing in front of you,” she said.

“It’s scary and sad because it goes so fast. Can we slow down time?” Kardashian shared.

“I am so utterly obsessed with her. This first year has been amazing,” the Good American mogul said. “And I really feel like I was meant to do this.”