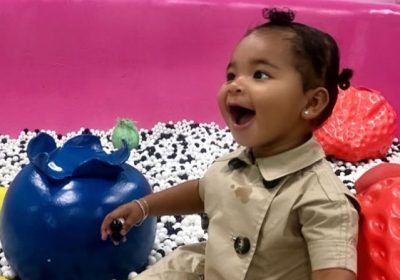 Khloé Kardashian wrapped up her birthday weekend with a “true” treat.

The Keeping Up with the Kardashians star, 35, took her 14-month-old daughter True to the World of Fruit Museum in Los Angeles on Sunday and shared some adorable photos of her baby girl having fun at the exhibition.

In the first few images that Khloé posted on her Instagram Stories, she documented her daughter exploring a mirrored room lit up by glowing balloons. Later, baby True could be seen inside of a World of Fruit Watermelon Popsicle cart, leaving with a watermelon popsicle to munch on.

True appeared to have had an absolute blast, smiling wide as she played with the assortment of fruit exhibits in the museum — from watermelon shaped swings to a berry-themed ball pit — while her mom captured the precious moments.

On Thursday, the Revenge Body with Khloé Kardashian star also rang in her 35th birthday with her daughter and sisters Kim and Kourtney Kardashian as well as Kylie and Kendall Jenner with a pink-themed celebration.

Khloé’s mother-daughter day at the museum comes ahead of the Keeping Up with the Kardashians finale Sunday night, which addresses Tristan Thompson‘s cheating scandal with Jordyn Woods.

Thompson first allegedly cheated on Kardashian just days before she gave birth to their daughter in April 2018. Though they reconciled, their relationship never fully recovered — but it’s been over for good since news broke that he hooked up with Kardashian’s longtime family friend, 21-year-old Jordyn Woods, in February.

The scandal is currently unfolding on KUWTK, but Kardashian said she hasn’t been tuning in.

“I normally watch when it airs, but I know what happens,” she told Extra, adding that she chose not to watch last Sunday’s episode and stayed off social media.

“I don’t think it’s that healthy to keep reliving and going through all those emotions again,” she said. “It’s crazy to hear everyone’s opinions and picking sides, and there’s no sides to pick. It’s happening to me and my family, and I want everybody to have love. … It’s just life, and we are all going to grow and be better people because of it.”

On Thursday, the NBA star, who is True’s father, dedicated a rare Instagram post to Khloé, in honor of her birthday, calling her an “amazing mommy.”

“Happy birthday @khloekardashian,” he captioned a photo of the star with their daughter True.

“You are the most beautiful human I have ever met inside and out,” he continued. “Thank you for being an amazing mommy to our princess True. She is blessed to have someone like you to look up to. I wish you nothing but more success and sending you positive blessing your way. Enjoy your day Koko.”

Part two of the season finale of Keeping Up with the Kardashians airs Sunday at 9 p.m. ET on E!