Home » Family Health » Keeping Up with the Kousins! 29 of the KarJenner Crew's Cutest Moments

Keeping Up with the Kousins! 29 of the KarJenner Crew's Cutest Moments 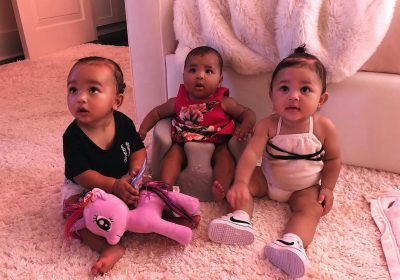 Living the dream! True and Dream were all smiles during a Jan. 28 outing to the Los Angeles County Fire Dept. Station 125 in Calabasas, California, where they got to hang out in (and on!) a real fire truck. Khloé Kardashian’s 9-month-old daughter True and her older cousin Dream, 2, “drew cards and brought cookies for their visit” to show their appreciation for their local heroes, Khloé proudly shared afterwards.

Get into the groove! True, Stormi and Chicago seemed to have a blast at a baby class with Khloé on Jan. 23, where the little cousins rocked out to various nursery rhymes — including one in Spanish. Rob Kardashian’s daughter Dream also took part, dancing along with her cousin True in a video posted to Khloé’s Instagram Story.

For the annual KarJenner Christmas Eve bash, the newest moms of the bunch — Khloé, 34, and Kylie, 21, went all out with festive mommy-and-me outfits to twin with their little ones.

Chicago couldn’t help but join in on True and Khloé’s twinning moment when the mommy-daughter duo dressed up as unicorns for Halloween. The photo was one of many of the close-knit cousins that Khloé posted to Instagram to celebrate Chicago’s first birthday on Jan. 15.

As part of True’s birthday tribute to Chi, Khloé shared this shot of the two enjoying the sweet treats at True’s 6-month-birthday cupcake party.

Chicago rests her head in True’s lap as the two seem to communicate with a silent look.

“I can’t wait to hear their voices And their little conversations! I wonder what they are thinking!” Khloé mused in her Instagram caption, sharing a sweet snap of daughter True cozied up with cousin Chicago in a furry chair over the holidays.

Khloé’s got her hands full! The new mom bonded with daughter True, 9 months, and niece Dream Renée, 2, over the holidays.

Saint and Reign separated from the girls to strike a few poses on their own.

True, 8 months, and Chicago, 11 months, were besties who fought the flu off together after Kim Kardashian West sent her daughter to Cleveland with aunt Khloé Kardashian for a few days to hopefully avoid contracting the illness in Los Angeles.

Khloé shared an adorable snap to her Instagram Story of Chicago and True getting their beauty sleep on in their carseats.

Penelope isn’t letting anyone get in the way of her relationship with baby True.

North and Penelope dressed up like Kanye West and Lil Pump for Halloween, taking their inspiration from the duo’s September SNL performance outfits.

Not to be outdone by their sisters, Saint morphed into his father while Reign dressed up as Lil Pump from the rappers’ music video “I Love It.”

In an image from the sisters’ fall 2018 Bali vacation, Chicago smiled while looking down toward her toes as True’s face lit up while she gazed at her slightly older cousin.

True was all smiles in a cute yellow turban with cousin Reign on the Bali trip.

True took some cues from big cousin North as the adorable duo spent some time together with a fun learning toy.

For True’s 6-month birthday, Khloé threw a cupcake party that she captured on camera, featuring her daughter with cousins Stormi, 11 months, Chicago, Dream Renée, 2, and Saint.

Also on the blanket were different sprinkle-topped cupcakes, which had the oldest of the famous kids entranced, and a big sprinkle-covered cake for the half-birthday girl.

In September, Kim shared an adorable photo of daughter Chicago sitting alongside cousins True and Stormi, each looking up wide-eyed.

In September, Kylie shared an adorable snapshot on Instagram of her daughter Stormi getting cozy with cousin Chicago.

The little ones, who are just 17 days apart in age, were decked out in matching long-sleeved pink pajama tops and coordinating pink bottoms.

Fittingly captioning the image “Slumber party ?,” Kylie captured the precious moment as the girls lay on a fuzzy pink blanket.

In a September snap Kim shared, Chicago struck a seemingly protective pose for the sake of Khloé’s daughter True.

Both girls were looking into the camera, with Chi wearing an inquisitive expression while her little cousin True flashed a huge grin from her baby chair.

“I got this True,” Kim narrated in the caption.

“These are the moments I’ve been waiting for!!! ??? how blessed am I?!?!” Khloé captioned the photos. “P is an incredible photographer! And True is a very good baby model lol (she sort of had no choice).”

“Happy 6th Birthday my baby girl Penelope! I love you so much you have no idea! But P, what’s the tea you’re spilling here?!?!?! ☕️?,” Kim wrote in July alongside a snap of besties Penelope and North, seemingly sharing some top-secret information.

In August, Chicago and True were two adorable peas in a pod as they hung out next to one another atop a cushy play mat, gazing in front of them at something that had clearly caught their attention.

Khloé shared a series of clips to her Instagram account in July that showed True accompanying cousins Penelope and Dream to a baby class.

Penelope held baby True on her lap in one clip while Dream busted an adorable move with the other children to the tune of “Mambo No. 5.”

“Baby class is poppin!!!!” Khloé wrote atop the latter video.

An early photo of True and Chicago together on social media was shared in June by Kim, to wish Khloé a happy 34th birthday.

“Happy Birthday to one of my favorite souls on this planet!” Kim captioned the snapshot of herself and Khloé, with their daughters situated atop the latter’s lap. “This year you have shown strength like none other. I admire you for always following your heart.”

She continued, “I love seeing you as a mom and can’t wait for the years ahead. Let’s celebrate you today! I love you to infinity!”

The annual KarJenner Christmas card is usually a big production, but in 2015, the family decided to keep it simple with a sweet photo of the next generation. Stylishly coordinated in all-black outfits, North posed alongside her cousins Penelope, Mason and Reign.