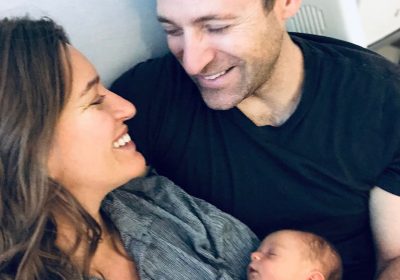 Katy Tur has returned to her co-anchor post at MSNBC Live almost five months after welcoming her first child, son Theodore, a.k.a. Teddy — and she has a few things to say about the importance of parental leave.

In Wednesday’s “One More Thing” segment on her first day back from maternity leave, the new mom recalled the difficult experiences she had after giving birth on April 13 that included an “unplanned” cesarean section, breastfeeding challenges and even postpartum hallucinations.

“My [c-section incision] ended up getting infected — something, luckily, my husband [author and CBS news correspondent Tony Dokoupil] noticed because I was too afraid to look down there,” shares Tur, 35.

She adds that her son was born “healthy but small,” dropping down under 6 lbs. at one point after his birth.

“It was fine so long as he gained it back, which meant he needed to eat and eat and eat and eat, which was not so easy not only because of the c-section but because breast milk is not the instant, grab-and-go, ready-made meal you might think it is before you suddenly try to produce it,” Tur says.

Carnie Wilson Had Postpartum Hallucinations After the Birth of Her Daughter: “I Heard a Voice Say, ‘I’m the Devil’ “

While she was still in the hospital, Tur remembers being so tired that she felt like she was in a “waking dream” where she “thought my mother-in-law was hiding under the bed” and “a tall man was standing over me, speaking German.”

“I told the nurses thinking that they’d understand, maybe even chuckle, and instead they sent in a full psychiatric team to evaluate me,” she says, laughing. “Spoiler alert: I was, and still am, sane.”

“But I was terrified on the day I had to leave the hospital,” Tur admits. “I was afraid to be alone with the new baby, afraid I didn’t know what I was doing. Sensing this, one of the nurses pulled me aside when my husband was in the bathroom and said, ‘Don’t worry — he knows what he‘s doing. You can lean on him.’ And he did.”

“Nothing about this story is exceptional except that I got a lot more paid time off to figure it out than the majority of new moms in this country,” she continues, noting that Dokoupil took more time off than 70 percent of new dads and calling the fact that 25 percent return to work two weeks after giving birth an “insane” statistic.

Tur thinks it’s also “insane that seven out of 10 men go back after 10 days or less” — “not because they want to” so soon, “[but] because they’re forced to go back either because they can’t afford to stay home or they feel societal or professional pressure to prove that they are serious about their job.”

“Family leave supports babies, which supports us all,” Tur proclaims. “People [at the Capitol] talk about figuring it out, but for some reason it still has not gotten done. It hasn’t even gotten a vote. And that is shameful.”