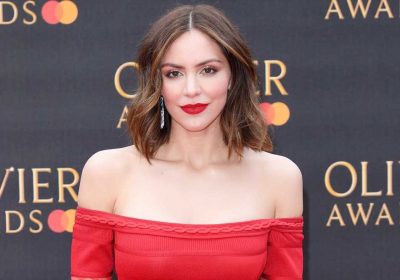 Katharine McPhee is opening up about how her pregnancy brought up old feelings she had as she previously struggled with disordered eating and bulimia.

On Monday's episode of Dr. Berlin's Informed Pregnancy Podcast, the American Idol alum — who recently welcomed her first child, a son, with husband David Foster — said that "the biggest challenge" during her pregnancy "was really the body-issue stuff."

"It just suddenly came up in a way that hadn't been present in a long time," said McPhee, 36, citing her past struggles but also noting that she has "felt really stable in my life in the last four or five years, and my weight has been more consistent."

"But feeling like there was a relapse after getting pregnant was really shocking and upsetting and concerning for me, because I was suddenly so obsessed with food, starting from this first trimester, and I had such a distortion of the way that I looked," added the actress and singer, sharing elsewhere in the chat that she gained about 40 lbs. during her pregnancy.

"I look back at these pictures and my husband was documenting every day because I'd be like, 'Take a picture of me now. Am I showing?' " she said. "And I look back and I'm like, 'Oh my God, why was I so hard on myself?' "

McPhee reached out to the psychiatrist she had previously worked with before her stint on Idol, who told her "that it's really common for women who have struggled with eating disorders in the past to have almost a relapse, in some sense, when they enter pregnancy."

"And it made me feel so much better that I wasn't alone in that headspace … by just meeting with him and him talking me through it," she recalled. "It wasn't like he gave me a bottle of pills and said, 'Here's your pills for anxiety.' That's not what he did when he met with me, but he was just talking through it and asking questions."

"I think it was also because I was going back to film on the show on Netflix that I had started, [which] obviously paused during the [COVID-19] pandemic," she added. "But yeah, that was probably and has been the hardest part of pregnancy for me, was just feeling like I was relaxing in some capacity with my food issues."

McPhee recalled feeling "really ravenous" during her first trimester, which made her think about what her body was telling her then versus when she struggled with eating disorders.

"You're like, 'Is this just the eating-disorder version of me or is this actually my body?' … Suddenly, the cues felt really different, and I didn't know how to interpret them," she said. "When I did eat, I would feel really full and it was very confusing [and] made someone who felt like I had it figured out, the food issues, [feel like] suddenly I didn't have any of it figured out."

And while she didn't feel like she had "full-blown relapsed," McPhee said "it was definitely a feeling like I was overeating and then I had that stuffed feeling where I couldn't breathe and I couldn't figure out if [it] because there was a new thing in my body that was making me feel stuffed or if I was actually eating too much food."

"And there's just a lot of anxiety," she continued. "But I weathered it and I'm just really grateful I'm at the end of it [and] that I feel this good and that I look in the mirror and I'm like, 'Yeah, my legs, my thighs, my arms are a little bit thicker, but I'm okay with it.' "

If you or someone you know is battling an eating disorder, please contact the National Eating Disorders Association (NEDA) at 1-800-931-2237 or go to NationalEatingDisorders.org.