Home » Family Health » John Legend Reveals He'll Be Away from His Kids on Father's Day — But with Chrissy Teigen!

John Legend Reveals He'll Be Away from His Kids on Father's Day — But with Chrissy Teigen! 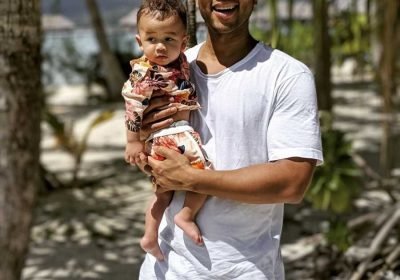 John Legend is headed overseas for Father’s Day — without his children.

The singer, 40, who recently teamed up with Pampers and Koala Kare to install 5,000 changing tables in men’s restrooms across North America, has quite the busy schedule this summer.

Because of his work demands, Legend reveals to PEOPLE that he won’t be able to spend the holiday with his daughter Luna, 3, and son Miles, 13 months, like he has done in previous years — but he’ll still be doing something special with wife Chrissy Teigen.

“Last year we did a big thing. We did a big brunch with the family and Chrissy took me out to Napa Valley for dinner at French Laundry. It was a beautiful day,” he shares. “This year, we have to fly to France for work.”

“We’ll be at Cannes Lions [International Festival of Creativity] next week and Chrissy and I both have to be there,” Legend continues. “So we’ll spend Father’s Day together but the kids will still be in LA.”

During the five-day festival, the Grammy award-winning singer will serve as a featured speaker on the panel “Reimagine Creativity Through Love and Humanity.” He is also expected to perform during his time in France, according to Variety.

Luckily, Legend says his recent family vacation to Europe, in addition to some others trips that are planned for the coming months, will make up for lost time with his little ones on Father’s Day.

“We had a great vacation [to Paris and Italy]. It was so much fun,” shares the singer, who played at The Hollywood Bowl’s opening gala on Saturday. “[This summer] is gonna be fun.”

“We’re going to Cannes Lions; that’ll be exciting. We’ve got a couple of more trips planned with the kids,” Legend continues. “One more to Europe and one to Asia. It’s gonna be a pretty fun, busy summer.”

Adds the working dad of two: “In between all of that, I’m gonna be writing some songs and then taping some episodes of The Voice too!”

The vacations have served as more than just a time for Legend to relax — they’ve also been a chance for him to observe Luna understanding more as she enters a new phase of “toddlerhood.”

“She was really aware of what was going on and able to take it in more and truly enjoy it. It was a new milestone in our vacationing,” Legend explains to PEOPLE of their trip to Italy and Paris.

“She was really aware that we were in a new place and enjoying the culture,” he adds. “She’s just much more smarter and able to enjoy the trip more than she ever had before.”

Miles, meanwhile, may not be as aware as his big sister just yet, but he’s certainly making strides of his own.

“He’s already talking a little bit,” shares Legend, adding that his son is getting ready to walk. “He’s so close, he’s grabbing everything. He’s been half-crawl, half-walking … but I think the walking will come soon.”

And as Legend continues to share those big moments on social media, he says he’s embracing his role as a dad and being able to share that with the world.