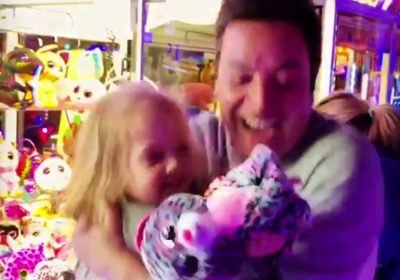 The Tonight Show host couldn’t contain his excitement in a video he shared to Instagram Sunday, which showed off the pure joy on his face and that of his younger daughter Frances Cole, 4, after the proud dad helped his little girl win a pink stuffed cat from a claw machine.

After Fallon, 44, helps Franny line the claw up just right during their family outing at The Clubhouse in East Hampton, New York, she confidently mashes the game’s button down and seals the deal.

“Franny, we got it! We actually got it!” Fallon exclaims in disbelief in the video, presumably taken by his wife, producer Nancy Juvonen. “Wow, that never happens. This is unbelievable.”

Jimmy Fallon Talks Having Two Young Daughters: Fatherhood Is the “Greatest Thing That Has Ever Happened to Me”

“Oh my gosh, this is so worth $300!” he continues before picking Franny up and jumping up and down.

“Wow, that was insane,” adds a smiling Fallon, credit card still in hand as he addresses the camera after putting Franny back down: “We gotta go home, that’s it.”

Fallon doesn’t often share photos of his daughters with Juvonen, 51, but the ones he does choose to post on social media are super cute.

“One … two … THREE @sesamestreetlive MONSTERS!! Ah ah ahhhhhh!!!!” the late-night host captioned a photo last month of himself, Franny and the couple’s older daughter Winnie Rose, 5½, posing with Elmo, Grover and The Count at Madison Square Garden in N.Y.C.

On New Year’s Eve, the father of two posted a snapshot featuring Juvonen and their girls in Deer Valley, Utah, enjoying their fifth annual ski trip to ring in the new year.

“Skiing into ’19. Happy New Year! ❤️ the Fallons. #HappyNewYear #DeerValley,” Fallon captioned his Instagram photo of the family sporting their snow clothes and posing with their skis.

After time spent outdoors in the winter-wonderland, the Fallons hit up multiple restaurants throughout their stay, including Park City’s Yuki Yama Sushi and Riverhorse on Main for dinner.