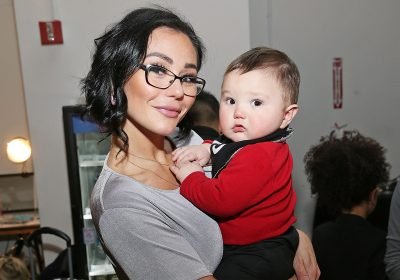 Jenni “JWoww” Farley wants her baby boy to have the brightest future possible.

The Jersey Shore star, whose 2½-year-old son Greyson Valor was diagnosed with autism last fall, is one of KultureCity‘s newest board members — an organization that has changed her family’s life.

She was introduced to the nonprofit, which is dedicated to building inclusion for people with autism, through a friend, Tiki Barber‘s wife Traci, shortly after Greyson’s diagnosis.

“She started telling me all about it and I was like, ‘I’ll be honest, I don’t even know what this means,’ ” Farley, 34, tells PEOPLE. “She goes, ‘Well, listen. I’m going to do one better for you. Clear out a room in your house, and within a week or two, I’m going to put a sensory room in your house and you’ll understand.’ “

“Without skipping a beat, she rolled down here with a big truck full of bean bags and bubble walls and gadgets and sensory bags,” continues Farley. “I was just crying, I couldn’t thank her enough. Immediately, Greyson found his calming spot. Down to the color of the wall — it’s all science.”

Since his diagnosis, Greyson has been in early intervention therapy and sees four or five specialists on a weekly basis. Reflecting on his progress, Farley is prouder than ever.

“Coming from September when he didn’t even know his name — like, he would not respond to his name once,” she says. “It was a concern of ours because we actually thought it was his hearing, originally.”

“Now, to me, he’s brilliant,” she continues. “He knows all his ABCs. Now we’re working on combining two words.”

“He loves gumballs, so he’ll just say, ‘ball,’ ” she explains. “Now I make him pick the color of gumball that he wants. He’s understanding — there’s a big [distinction between] speaking and understanding a word. So when we line up colors, he actually knows what color goes with what instead of just staying the color. It’s about building the bridge, which is a big issue in [Autism Spectrum Disorder].”

Snooki on JWoww’s Split: “I Think They’re Gonna Be Fine”

Farley recalls regular occurrences, just a few months ago, when Greyson would “scream at the backdoor wanting to go outside.”

“He wouldn’t understand that Mommy has to go get his shoes first. In that 30 seconds, he would throw himself on the ground and head-butt and cry,” she says. “He was like, ‘What is this woman doing? She’s not paying attention to me.’ “

“Now I’m like, ‘Bubby, you want to go outside, you’ve got to go get your shoes,’ ” says Farley, who is also mom to daughter Meilani Alexandra, 4½. “And he goes and gets his shoes, and he wants help putting them on.”

Farley says applied behavior analysis (ABA) therapy has been instrumental in Greyson’s progress. “That’s the other thing that KultureCity does — ABA therapy,” she says. “We’re so blessed with the team that we have. Part of KultureCity’s donations go towards children that need ABA and can’t get insurance or can’t afford it.”

“ABA is one of the most scientific, data-researched ways to help children who have autism. They come for two hours a day, almost every day, and it’s such an amazing thing,” the reality star continues, adding with a laugh, “They’re going to help me potty train him soon. I don’t even know how that goes, but we’ll see.”

With KultureCity, Farley’s ultimate mission is to build sensory rooms in airports, since that’s where Greyson has struggled the most. The organization is also working to build the rooms in arenas, hospitals, schools, restaurants and more. Each sensory room costs about $5,000 to build.

“They want their kids to be able to go to WWE events and the UFC and go on plane rides like I want my son to. But because of the sensory-processing disorders, they can’t,” she says. “So KultureCity is a bunch of parents that want to change the world, and I wanted to help, too.”

The mother of two has since enrolled Greyson in a preschool program because she wants him “to be around his peers.”

“Half days, so he’s still able to do therapy in the afternoon,” she says. “But I really want him around 3-year-olds, at summer camp, where he’s learning how to swim and ride horses and just really experience everyday life with children his age. I feel like he’ll feed off them and learn from them and grow from them.”

“I need to be that mom that paves the way for her son to have the best, most normal future that he can possibly have,” Farley adds. “He’s never going to miss another event if I have anything to do with it.”