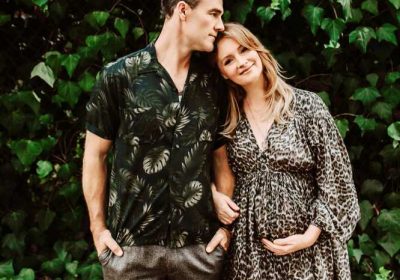 James Van Der Beek and his wife Kimberly spent Thanksgiving with their kids after recently revealing that she had suffered a miscarriage.

On Thursday, the parents of five — who share Gwendolyn, 17 months, Emilia, 3½, Annabel Leah, 5½, Joshua, 7½, and Olivia, 9 — posted loving messages on Instagram to express their thanks to family and friends for all the support they’ve received.

“In a place of newfound gratitude to have @vanderkimberly in this world today. Got really scary for a minute there – scary enough to wake me up to how much appreciation I have for so many things I just take for granted,” the actor, 42, wrote, referring to his wife’s miscarriage, during which she said she “nearly lost my life.”

“I’d never been so open (especially with tragedy) as I’ve been these last few weeks, and you responded with love and support and prayers and shared your own stories, and we felt the energy… and it helped. So thank you,” Van Der Beek told his fans and followers.

Meanwhile, Kimberly gave an update on her health and body. “I am more grateful for life than I have ever been. For my husband. My children. My family. His family that is my family. An incredible hospital nearby,” she said on Instagram.

During the Nov. 18 episode of Dancing with the Stars, the Dawson’s Creek alum announced that Kimberly had suffered a miscarriage the weekend before. Although James was unsure if he would be able to dance on the live semifinals episode, Kimberly, 37, pushed him to continue competing.

Unfortunately, after dancing in her honor, James and pro partner Emma Slater landed in jeopardy and were eliminated from the ABC reality dancing competition series.

Kimberly has since been open about her recovery process. In an Instagram Story video last week, the mother of five thanked her friends and fans for their continued support and gave an update on her physical and mental well-being.

“Thank you so much for all the love,” Kimberly said while cuddling daughter Annabel. “I’m so grateful for it. A lot of you have asked how I’m feeling physically. I’m healing. I am definitely healing.”

“My biggest thing is my blood pressure,” she added. “I just get very lightheaded very easily so I can’t really get up and walk around for more than a couple minutes right now. A lot of blood transfusion action this weekend, so I’m just taking it super easy trying to restore and build my blood.”

The former business consultant also said that she appreciates all the kind words, messages of support and “love around” her that she has received since sharing the news.

In a previous video posted on her Instagram Story right after the DWTS episode aired, Kimberly thanked her followers for their support following the news, and shared more details about what she had gone through.

“In 48 hours, we lost our baby — boy, by the way — and I almost lost my life,” she revealed. “Which is not a story that has been told, but at some point I can dig into the details with you guys about what happened in the emergency room.”

The couple has been through miscarriages before, as James explained on Instagram back in October when he went public with his wife’s pregnancy.

“Miscarriage (a word that needs a replacement — nobody failed to ‘carry,’ these things sometimes just happen) is something that people rarely talk about, and often go through in secret. But there needs to be zero shame around it, or around giving yourself the time and space to grieve,” he wrote in the announcement.

Van Der Beek added, “We decided to put ourselves out there — not knowing what we’d find — in an effort to chip away at any senseless stigma around this experience and to encourage people who might be going through it to open themselves up to love & support from friends and family when they need it most.”